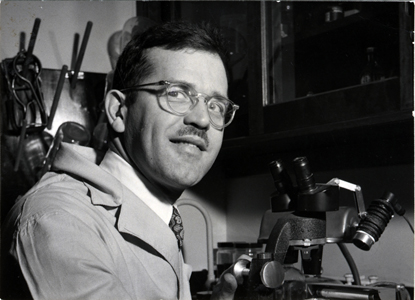 Ian Grant ’13—Sometimes during the course of archival research you find a Bigfoot. Rather, you find yourself searching for a Bigfoot, as they are rarely, if ever, found. These are the photographs that corroborate a myth.

My Bigfoot is a turtle.

Specifically a box turtle, like those that Professor of Biology Eliot Williams studied at Allee Woods during his tenure at Wabash from 1948 to 1983.

The hunt started with a story told by Don Kerner ’62, a student when Williams was beginning his study of the homing range of the three-toed box turtle. In order to properly track the turtles’ movement and distance (This was the early 60s after all; GPS was still decades away.), Williams attached spools of string to the tops of their shells, hoping that the unraveled string would mark their trails.

Kerner walked into Williams’ Waugh Hall office one day and saw turtles with spools crawling along the floor. Williams had left the room and the turtles alone. Kerner eyed the exposed pipes that ran along the ceiling and decided that these turtles needed to go on an adventure.

He hoisted up a turtle and looped it around one of the pipes. At that moment Williams walked in. Before he could protest, Kerner set down the turtle and said, “Just a joke.”

Kerner’s story is featured on this year’s Scarlet Yarns project, a collection of alumni tales from their times here at Wabash. Watch Don tell his story here:

So I was trying to find a photo of Williams with his turtles to be included in the film.

By happenstance this past week I read an article in Audubon Magazine by Professor of English Marc Hudson titled Out of Time in Sugar Creek Country. In it Hudson mentions offhand a time he visited Allee Woods:

“I’d gone to this place a few times before to spend the morning scribbling in a 20-year-old relic trailer with a mushy floor. I was disturbed only once by a biology major who was studying the home range and movements of box turtles.”

The universe was determined to tease me. Here was one more reason I needed to find a photograph of Williams’ turtles. At this point I didn’t care about finding the photograph for Scarlet Yarns—I needed to find it for me. And yet there were other reasons, too.

Dr. Tim Sipe ‘78 from Franklin and Marshall College, who’s back at Allee Woods this summer, told me that as an ecology student he had been required to record any turtles he stumbled across. A favor from Dr. Robert O. Petty to Williams.

And again, while searching for the photo I found an interview in the Wabash Magazine with University of Oregon Professor of Chemistry Frederick Dahlquist ’64. He recalled his experience assisting Professors Petty and Tom Cole ’59 at Allee Woods: “We had to creep around and leave Eliot Williams’ box turtles untouched. After all, I was a chemistry major.”

However remarkably slow these creatures may be, they have still managed to outrun me.

And they can move.

I’ve heard, through the grapevine, that one of the tagged turtles from Allee Woods had been found in the Mississippi delta. Washed from the bank of Sugar Creek, down the Wabash, the Ohio, and finally found nearly 800 miles away.

Box turtle research may seem way out there, but Williams’ work was ahead of its time. It showed how the commercial development of land affects the fauna of protected areas, such as Allee Woods. Indeed, his research showed a decline in the population of box turtles. The species most common to Indiana, Terrapene Carolina, is now listed internationally as vulnerable.

They are becoming scarcer, harder to find.

So maybe the photo, much like the turtles themselves, is not running. Maybe it’s just hiding. Pulling in its legs and head, resigning itself to the bottom of a manila folder in the back of a dusty filing cabinet, somewhere, waiting. 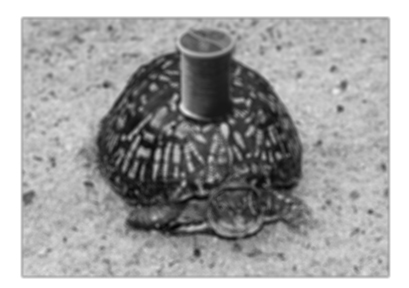 Artist's rendition of Professor Williams' box turtle (with spool). If you have a story, photo, or an actual sighting, please let us know.

Ian Grant is an intern this summer with Wabash Magazine and the College’s Office of Communications and Marketing.