Jim Amidon — Just when you think you’ve seen it all, along comes the 118th Monon Bell Classic. 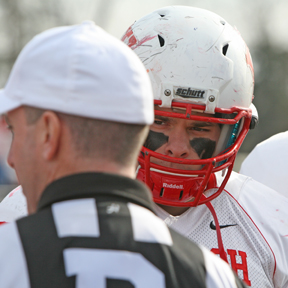 But no one could have predicted what happened Saturday in Greencastle, when the Little Giants rode an unrelenting defense to a 45-7 win and a perfect 10-0 regular season record.

After a sluggish first 10 minutes, Wabash blitzed the hosts with 21 points in just over two minutes. A fumble recovery led to Vann Hunt’s 33-yard touchdown run, which was followed by Jonathon Koop’s interception return for a touchdown and a Wes Chamblee punt return touchdown.

While Wabash’s offense sputtered and fizzled for much of the game, the team’s defense swarmed, pounded, ran like the wind, and aggressively punished a DePauw offense that had been decimated by injuries all year long.

It was one of the most awe-inspiring defensive efforts in Monon memory.

And while maybe it shouldn’t have been surprising given the personality of the team’s defensive leader, C.J. Gum , it was a stunning game plan executed to near perfection.

Gum has never been as focused for a game. When the second quarter started and Wabash was already on top 24-0, I said to someone, “Has C.J. made every tackle or does it just seem like it?”

By game’s end, he had made 16 tackles and a sack. But his pile-driving hits set the tone for the day and clearly rattled the Tiger offense.

Pat Clegg is congratulated after his touchdown

Akinribade, who was recruited by DePauw, had five tackles and a sack; the sack resulted in a fumble and a Wabash touchdown. Buresh had six tackles and helped Wabash limit DePauw to just 39 rushing yards.

Another freshman performed every bit as well. Denzel Wilkins, a safety, had five tackles and returned an interception for a touchdown.

Just before halftime, the defense took what little life DePauw had and snuffed it out. Akinribade hammered Tiger quarterback Will King, who fumbled the ball into his own endzone and Pat Clegg pounced on the ball for a 31-0 lead at the break. It was Clegg who had hit King earlier in the game, which led to Koop’s interception.

It was a literal feeding frenzy for Wabash’s defense; each player on the field seemed to want to get his name in the box score.

The defensive intensity helped offset Wabash’s sluggish offense. The key going in, according to Coach Erik Raeburn, was to avoid offensive turnovers. While Chase Belton completed only two passes (and All-Conference receiver Jonathan Horn never caught a pass), the offense held on to the ball and scored when it needed to.

DePauw’s defense played a valiant game, but the Tigers’ offense was no match for Wabash.

I’ve seen a lot of Monon Bell Games, but I’ve never seen one quite like the 118th clash. The defense scored three times and set up two other touchdowns with turnovers.

The win, the defensive performance, the undefeated regular season — all had to be satisfying for Gum, who returned for a fifth year with a medical redshirt. Chamblee, his fellow co-captain, was all smiles after the game. Wes blew out his knee in the season-opener last year, but worked so hard in rehabilitation, he returned for his final year better than ever.

Chamblee got his Monon Moment, too. Late in the first quarter, DePauw punted high into the wind. Chamblee spied the ball and with a running start caught the punt. Five seconds later he was in the endzone celebrating his fourth return touchdown of the year. And as he has done all season, he pointed to Heaven in a salute to his grandfather.

The Monon Bell rivalry is special because both DePauw and Wabash are excellent institutions and alumni from both schools are proud and generous.

But when the day is done and the bell is ringing on the winning sideline, the thing that matters most is the intensity of the athletes who put it all on the line for 60 minutes with the world watching. On Saturday, it was Wabash that delivered the intensity and focus, and the Little Giants will ring the Monon Bell for another year.