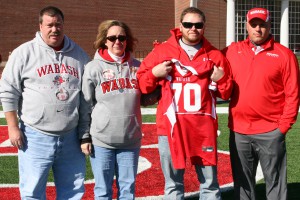 Jim Amidon — For about 15 years, I’ve taken senior photos at Wabash College sporting events. The drill is almost always the same: Line up the seniors and their parents before the start of the last home game/meet/match and snap a photo of the senior, the coach, and the family.

I say “drill” because for my part, it’s pretty consistent from sport to sport and season to season. But I do consider it an honor to take those photographs. The parents are usually beaming with pride (moms will occasionally shed a tear) and the student-athletes exude confidence and accomplishment.

At the moment I snap the shot, I think about that particular senior and the mark he’s left at Wabash — in the sport and across campus. Most of the College’s athletes have back stories — maybe they’re actors or mathematicians; moot court competitors or economics tutors. When I take the photo, I think about the whole man and the opportunities he’s seized during his four years at Wabash. 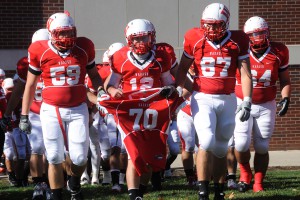 The seniors carry Josh Linthicum's jersey and memory into the conference championship game.

Saturday, 20 minutes before kickoff of Wabash’s North Coast Athletic Conference championship game against Wittenberg, I was on the field as the senior football players gathered under the west goal posts. Coach Erik Raeburn stood on the goal line as each senior was introduced with his parents.

I chatted with Wes Chamblee, the All-American kick return specialist and national qualifying hurdler. I told him I was proud of him. He responded by saying, “We’ve got a lot more to do before you can be proud of us.” And then he told me he’d catch up with me in a couple of weeks. For the second time, he’s editor of the X-Position, the magazine of the Malcolm X Institute of Black Studies.

It was heartening that moments before one of the biggest games in his career, Wes had no interest in celebrating his past accomplishments. He was looking forward — and even thinking about his duties as editor of that magazine.

(By the way, he caught a touchdown pass in Wabash’s championship victory.)

C.J. Gum, Wabash’s fiercest fifth-year senior ever, had a look of focused determination as he gathered with his family before the player introductions. Eyes forward and emotionless when I took the photo, Gum walked across the field with his parents holding each of those mammoth arms. As usual, he let his play do the talking — crushing tackles, forcing a huge interception early in the game, and covering a late onside kick.

If ever there was a lead-pipe lock for a repeat conference defensive player of the year, Gum is that player.

The hulking senior offensive linemen — Jack Ruddy, Jake Shaffer, Bryan Elliott, Quintin Burkett, and Chris Daniel — have gotten little recognition during their playing careers. They just show up and do their jobs. On Saturday, each man had a face and a name, and earned the accolades they richly deserved. And by game’s end, they enjoyed the ultimate tribute — their blocking paved the way for a punishing rushing attack that tamed the Tigers.

The most gripping moment came last. After the final senior football player had been introduced, the stadium grew completely silent. A proud father, forcing back tears, propped up his sobbing wife as Josh Linthicum’s name rang out over the public address speakers.

Josh died from complications during what was thought to be routine surgery over the holidays a couple of years ago.

His passing was a crushing blow to Wabash, to the football team, and to scores of parents who think little of those “routine” off-season surgeries so many athletes undergo.

For Mike and Debbie Linthicum, it was the ultimate loss, and no parent can ever imagine a tragedy that strikes so quickly and painfully.

I’m told that his parents have gained strength by knowing the impact Josh had at Wabash, the friendships he made here, and the easiness of his personality that made him an instant buddy with every person he met. I can’t imagine they would have returned to Wabash for senior day had they not felt a profound connection to the College and Josh’s senior teammates.

I don’t know that Coach Raeburn had to give any kind of “Win this one for Josh” speech. I do know that Josh’s presence was felt by every senior in every game they played following his death.

Each man who stepped on the field Saturday did so with the number 70 on the back of their helmets and with a little piece of Josh in their hearts. Yes, the win brought another conference championship to Wabash. More important, it provided a meaningful tribute to the seniors’ fallen brother.