Patrick Madden: “To Think Without Restraint” 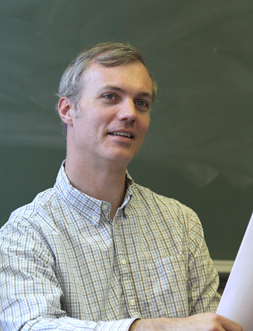 “What’s that?” he asked the startled students. Sliding behind one young man’s chair and making his way to the window in the Detchon Center classroom he asked again:

“You don’t hear that?” he asked, leaning to the window sill to peer outside. “They’re saying something—you hear that?”

A slight unease buzzed among the students. Was this guy nuts?

Then with perfect timing, Madden fixed his gaze on Sphinx Club pledge Ryan Lutz ’13, who was wearing the trademark ragged pot and odd garb of the Club’s initiates. The writer’s face broke into a mischievous grin.

The students still heard nothing but Madden’s words, but they got the joke. Worries that their guest might be a lunatic evaporated into relief and laughter. Earlier in the day the author had asked about the College’s “spirit and leadership organization” (and its members wearing their signature red and white striped overalls). He’d learned of the club’s unusual initiation rite requiring pledges to fall on their backs and yell “Boom, Boom, Boom” anytime someone yells, “Air raid.”

“So aren’t you supposed to do something?” Madden asked Lutz over the chuckles of his classmates.

“We have rules,” Lutz said, and he was right—pledge activities can’t disturb the classroom.

“I’m disappointed,” Madden said, playfully shrugging his shoulders and sitting down next to the pledge. And thus began an hour and a half writer’s workshop session concentrating on three of the students’ essays.

There’s teaching by word and teaching by example. A professor at Brigham Young University and author of the recently published book of essays Quotidiana, Madden proved skillful at helping students find the words to improve their own work during the two workshop sessions he led.

But that “air raid” request was an unforgettable example for writing students of the way a writer comes at the world—not only paying attention to his new surroundings, but engaging an audience with his discoveries.

That’s Madden’s stock in trade as a teacher and master of the associative essay, a craft he sums up as “connecting little snippets of observation.” At a noontime public reading in Lovell Lecture Hall on Tuesday, Madden’s host and fellow BYU and Ohio University grad Freeze noted that the author’s subjects range from music (as in Led Zepellin, Rush, Beatles) to Montevideo, Uruguay to laughter to doppelgangers to garlic.

The essayist majored in physics as an undergraduate and his writing carries a scientist’s meticulous observation skills infused with wild curiosity and love of language as a tool for exploration.

“Almost any work in cutting edge physics is invisible,” Madden told students. “I wanted something more tangible. I didn’t want to go after one interest. I thought if I could write essay I could study what most interested me at the time.”

Currently those topics include: What is originality? What is time? And Madden read to his Wabash audience a recently completed essay on momentum that blends physics and metaphysics with an injury to his daughter, the memory of brother-in-law’s burns and “a mother’s momentous guilt”—a piece in which objective observation leads to the deeply personal and moving, even faith.

“I love to think without restraint,” Madden said. In an interview on The Fine Delight blog, the author said this about one of his earliest essays: “It sprawls rather wildly, but I tried to contain it with subtitles and clever transitions and repetitions and resonances of symbol or idea. And in any case, I believe that, punning on Paul, ‘All things work to the good of them that love essays.’”

Madden opened his public reading Tuesday as he had his class a day earlier—with a question:

“What is the Wabash motto?”

“Not that one,” Madden said. And as students and faculty pondered the visitor’s question, the screen behind him flashed “Scientia et Virtute'”

“This one,” he said. “Knowledge and virtue. I like it because it seems a good two poles to describe what the essay does, away of exploring knowledge in a virtuous way—looking for the good in the world and in life.”

Madden’s travel writing has focused primarily on his wife’s home country of Uruguay. 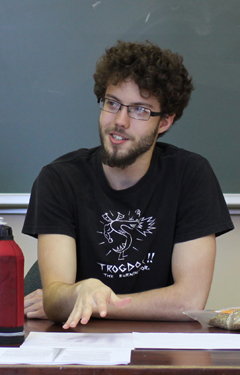 “But you don’t have to travel far from home,” Madden told students. In fact, two of the most successful student essays the group workshopped during the writer’s three-day stay on campus were about the students’ home places. “Travel writing is not about the exotic, but thinking about a place in interesting ways,” Madden said. “I’m intrigued by a writer who explores meaning wherever he may go, and to relive someone else’s experience in a virtual way can be richer—words can be better than experience.”

It’s too early to know if Madden’s words and workshop will inspire and improve the writing of Eric Freeze’s travel writing students. Two of their essays have real possibilities for publication. But will those students find the patience, humility, and self-discipline to revise in these lengthening days of early spring.

If they don’t, it won’t be because they haven’t seen how the work is done. From his air raid request to his reflections on the nature of momentum, Madden has opened their eyes to a much wider range of possibilities, as well as a writer’s responsibility to think, learn, and write without restraint.

In photos: (top left) Patrick Madden in Professor Freeze’s Travel Writing class; (above right) Liam Smith talk with Madden about his own writing.

“Storm”-ing into Regionals
Tradition-Rich and Cutting-Edge