If you had a chance to watch Matt Storm ’04 play basketball at Wabash, you know the drive and determination he showed on every single trip up the court. 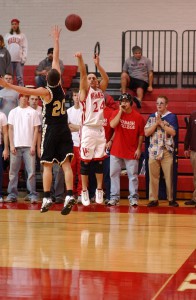 Storm played in 65 games at Wabash as one of the top 3-point shooters in Little Giant history. He connected on 107 3-point shots in his career, ranking him seventh all time. He also ranks in the top-20 on the Wabash career list in 3-point field goal percentage, free throw percentage, steals, and assists. He was an Honorable Mention All-North Coast Athletic Conference selection as a senior, averaging 11.1 points and 1.33 steals per game as a senior. 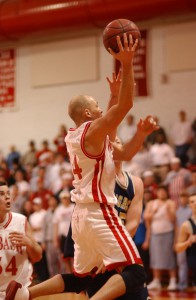 After graduating, Storm spent two years as an assistant coach at Manchester College before turning to the high school ranks as an assistant coach at Plainfield. This is his first season as the head boy’s basketball coach at North Miami. His team finished the regular season with a 5-15 mark, but won three games in the sectional to claim the title. Storm’s team will face Carroll (Flora) in the regional at Tipton High School on Saturday.

The Journal Review ran a feature story on Storm and his coaching success. You can read the article here.

Theta Delts are “Freezin for a Reason”
Patrick Madden: “To Think Without Restraint”