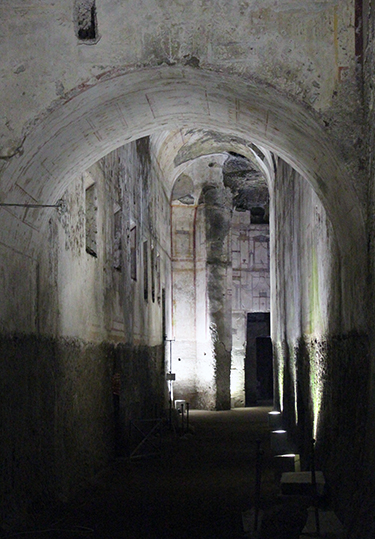 Mason McKinney ’17 – The best part about today’s trip was our tour of the church of San Clemente. On the outside, San Clemente seemed like any other church in Rome. The inside, at first, seemed to be the same story as the apse, arches, and altar all evoked a sense of awe and amazement in my eyes. I would soon find out, that this was no ordinary church as Dr. Hartnett directed us down a set of stone stairs which led us to a chilly and damp basement. The class then learned that this was an old church built early on in the 6thcentury, and that the level that we had originally walked into was built directly on top of what we were now standing in. After investigating this layer further, we found a stairwell that led us further down into the earth. At this point we learned that the 6thcentury church had actually been built on top of yet another church that dates to the 1stcentury CE. We had learned about this concept in class where buildings were often times filled in with earth and then built upon at a later point.

What I found to be most interesting about this tour was that we were able to see this stratification of history firsthand. In a matter of moments, my classmates and I walked down two flights of stairs that essentially acted as a time machine bringing us back nearly 2000 years into the past. Going on this tour allowed us to get a firsthand glimpse into the daily and religious lives of the people who lived in pagan as well as Christian Rome.