Richard Paige — Words seem to come easy to Clint Smith, especially when he finds his rhythm and words simply flow. That cadence produces an easy connection between speaker and listener, one that serves both well as the poet, historian, and journalist gives voice to a story that screams to be heard.

Smith made a virtual visit to campus Wednesday night as part of the President’s Distinguished Speaker Series, delivering a compelling hour-long talk – “Why Black Lives Matter” – and Q&A session for those assembled on Zoom. 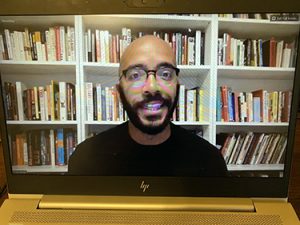 He mentioned early on that poems are an entry point to conversation, and used four of his poems to establish a message and open a dialogue. The key point, perhaps, echoed in the words from his poem, “How to Raise a Black Son in America.”

“When we say that Black lives matter, it’s not because others don’t. It’s simply because we must affirm that our lives are worthy of existing without fear when so many things tell us that we are not.”

Much of the conversation was rooted in American history – all 400 years of it –and driven home by this thought. “We are the annoying pre-teen of the world,” he said.

The imagery of his poetry, thoughtful and clear, force us to lean into the messiness, as he suggested, of the contradictions of the American experience. Whether it be a poem addressed to five of the U.S. presidents who owned slaves, musings on the New Deal, or thoughts on reconciling slavery served as an affirmation that Black lives, indeed, matter.

His thoughts of access and how his poetry can serve as an equalizer were intriguing. He claimed that his idea of fun was reading a 700-page book with a bag of hot Cheetos at his side. Others might not have that luxury, so he explained, “I’m always thinking ‘can I turn this into a poem?’ to capture the essence” of the book for someone who might not have the means to tackle it.

He admitted to being a disillusioned English major as a freshman, where the works of poets like Keats, and Yeats, Frost and Whitman didn’t resonate.

On an internship in New York City, he had an epiphany, discovering the Nuyorican Poets Café, a small and legendary spot on the lower east side of Manhattan that completely changed his understanding of what poetry could be. To hear him describe the people behind the mic that night – young, black, brown, disabled, and queer – offered a world different than what was presented to him on campus in North Carolina.

He returned from NYC and wrote “many bad poems for many years.” But he threw himself into those words through poetry slams, open mics, and readings, and soon discovered an ability to return to Keats and Yeats and Frost and Whitman with a different appreciation. There wasn’t pressure. Smith could respect the work for what it is.

“Poetry gave me a different entry point into literature that I hadn’t had before,” he says. “Poetry isn’t a bunch of dead white guys, it’s a robust, dynamic space that young people of color are very much a part.”

He implored students to read as much as possible. “Your job is to read books and discuss them and to think about them,” he says. “Read as much as you can. Find people, build community.”

Smith’s story is a liberal arts story, one that isn’t dissimilar to those found at Wabash.