Richard Paige — Tobey Herzog is back in the classroom and he calls it “one of the best experiences I’ve ever had.”

He retired in 2014, but old habits are hard to break. The Emeritus Professor of English can be found instructing yet another edition of Wabash men in Business and Technical Writing, a class he started on campus and taught for more than 30 years. 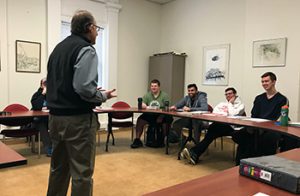 Tobey Herzog H’11 with his Business and Technical Writing students.

That experience makes him comfortable with the subject matter, but he had concerns about the students. Had they changed?

“I started this class and I feel comfortable doing it,” Herzog says. “I thought, ‘gee, four and a half years, the students may have changed.’ They haven’t changed at all. That’s one of the positive things about Wabash.”

For him, it was different. With only one class to teach, time became an ally. It opened up ways for him to think about the class in different and deeper ways.

“I discovered that if I had just taught one class per semester I would have been the greatest teacher in the world,” he laughs. “Having time to really think about each class, to prepare for it, and do some things that in the past I didn’t have enough time to get ready for has made it much better.”

The students are noticing, too. On this day, the discussion initially centered on what was learned from previous assignments and how to move forward. With a feasibility study and product development launch ahead, the lesson was clear: from this point forward, it’s time to apply what you’ve learned. 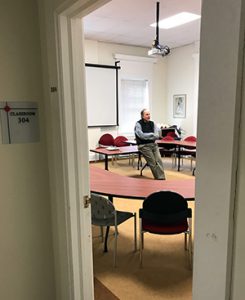 Herzog awaits the start of class.

“What is so interesting with Dr. Herzog is that it’s very practical information and he makes it very relatable,” says Simran Sandhu ’20. “It’s a good way for all of us to connect. It’s not just research and write. It’s very cool to get that sense of writing in various situations.”

As a business minor, this class is one of Sandhu’s requirements, but he had other goals in mind as well.

“Written communication is something I haven’t been able to articulate well over the years,” he says. “After a few classes with Dr. Herzog, I was confident I made the right choice.”

Like many retirees, Herzog’s concerns also addressed his own relevance.

“Once you retire the difficulty is still feeling relevant,” he says. “But then this opportunity to be somewhat relevant again – to walk on campus and have students who are in your class say hello and chat – I think it’s great.”

The shared experience seems like a win-win for everyone in that classroom.