Richard Paige — The text came out of nowhere on a random January day.

“Let’s see if we can get this show on its legs.”

The show in question was “I, Nephi: A Gay Mormon’s Survival Guide,” a one-man play that tells the true story of a man reconciling the world of his family with the culture of his sexuality.

Originally conceived and written by Joe Mount ’15 for his senior capstone project, I, Nephi, had only seen the light of day as a staged reading in the Spring of 2015. And if Mount had his way, that’s where things would have stayed…until that message was received nearly two years later. 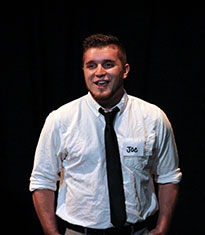 Joe Mount ’15 during his IndyFringe staging of “I, Nephi.”

“After the staged reading, I was terrified,” Mount says. “Rory asked if we could put it on, if he could produce it. Since that moment, it has been incredibly rewarding, slightly terrifying, an incredibly positive experience.”

Rory Willats ’17 was just the guy to make it happen. He and Joe had been friends largely from the time Rory arrived on campus and collaborated on a number of Wabash productions and developed a deep well of trust with each other.

“The only expectation I had was to do whatever Joe needed to help get this show on its feet,” Rory says. “It was just about telling Joe’s story and not getting in the way of it. I was a brain for Joe to bounce staging ideas off.”

Joe claims that level of trust was vital to bringing his thoughts to life. He says Rory knew well of the backstory, of Joe’s struggles with his family, and his hesitancy to take the play further.

“Rory was key in getting me to think about how the show would look and supporting what I was trying to say with what I was doing,” Joe says. “The collaboration really took off and we were able to bring this play out of the page and onto the stage.”

“When you go out on stage, you have to trust the person across from you is prepared, trained, rehearsed, focused, fearless, and completely engaged in the work at hand,” he says. “That’s an expectation we have as a Department, and it’s reflected in the work of graduates like Joe and Rory.”

Even in the middle of a successful six-night run at the Phoenix Theater during the 2017 IndyFringe Festival, Joe still felt those pangs of terror in that the show was staged at the festival and not the more familiar confines of the Wabash Theater.

“When Rory asked me to do it, I sat with the idea for a little bit and eventually saw no reason not to,” Joe says. “I knew this was someone I could trust. Someone who wasn’t going to violate the story of the experience. I only needed to trust him to keep me calm throughout the process.”

What Joe needed was someone to help him work through the emotional moments, the parts of the story he still struggles with, to objectively move the play forward. 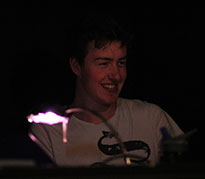 “I needed somebody slightly separated, not as invested, that could say, ‘Well this is what you are feeling and this is what you want to get across, so this is the way to do it,’ or, ‘What you’re doing right now is not going to be as effective,’” he says.

From that initial text, the two started piecing things together in June. Three weeks of rehearsals led into opening night.

“To do work at IndyFringe is to catapult the work outside of this safe space,” Cherry says. “Audiences of total strangers, limited budgets and technical capabilities, unconventional spaces, limited time and support. This is the theater that performers make when they leave college. It’s a great part of their education to mount work at IndyFringe.”

Rory reflected on how the theater connects people in ways where heartfelt stories are the result.

“Theater is built upon what happens when you put two people in a room,” Rory says. “Our rehearsal process – sharing the story and stretching that a little bit – was flexing our muscle. It goes back to the heart of theater, storytelling and creating a relationship with a room full of people. I don’t know if I could have done this if I didn’t have my Wabash experience, and my Wabash experience with Joe.”

Joe thought living and writing the story were enough. Thanks to his friend and collaborator, he got much more in return.

“Rory is the only reason it became active,” he says. “It always helped to have Rory to be there to say, ‘This is good, but this is not what you’re trying to do.’ It was an incredibly powerful experience.”