Christina Franks – On Saturday, the Little Giants will fight to keep the Monon Bell for the eighth year in a row. But on Tuesday, the Wabash community came together to help people who are fighting for their lives. 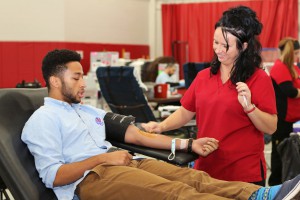 Aaron Stewart-Curet ’17 donates blood regularly, but the rivalry “Bleed for the Bell” incorporates makes it a little more fun.

Every year during Monon Bell Week, Alpha Phi Omega puts together a campus blood drive or “Bleed for the Bell.” And keeping true to the spirit of the week, DePauw hosts the same event on their campus, and it turns into a competition for a great cause.

“Yes, it’s really cool that we could beat the school down south in donations,” Nicholas Morin ’18 said. “But at the same time, what it comes down to is helping people out.”

As Alpha Phi Omega Vice President of Service, Morin is the coordinator for this year’s event and loves the idea of giving back in such a big way in a small amount of time.

Last year, 96 people showed up to donate blood during “Bleed for the Bell.” Morin’s goal this year was to reach 100 donors.

“Every pint donated is three lives saved,” he said. “If we have 100 donors, that’s 300 lives. Wabash can make a difference.”

Students, staff, and faculty filed into Knowling Fieldhouse throughout the day. Some of the students had never given blood before and thought this would be the best opportunity. For others, the fact that this was a competition against DePauw just made their regular habit of giving that much better.

Robert Reed ’19, who had given blood before believes the concept of “Bleed for the Bell” with DePauw during Monon Bell Week says a lot about the character of the two schools. “Getting both the schools together and doing this all as a group says something not just about ourselves but us as a group,” he said, “that we can come together for something bigger, which I like.”

Workers saw a steady stream of donors throughout the day and, for the most part, were able to get students into chairs and on their way fairly quickly.

“It’s always beneficial,” Tim Riley ’19 said. “Blood banks always seem to be short, and it’s something we can easily do with about half an hour of our time.”

To which another donor quickly pointed out:

“And it’s one more way to beat DePauw.”