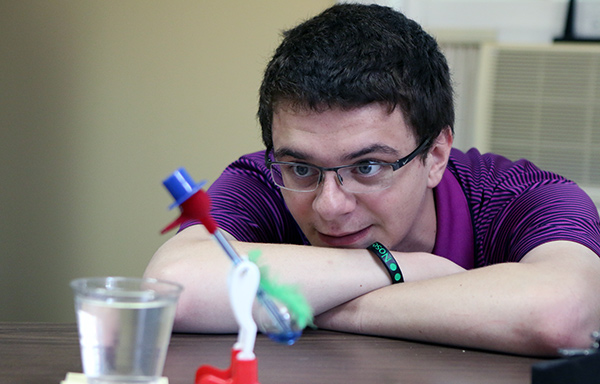 The office developed a slightly peculiar obsession with the drinking bird toy.

Christian Wirtz ’19 – I don’t want to give away any of the secrets hidden within the walls of Hovey Cottage. But if you’re looking for them, I would start behind the cardboard reindeer’s head in the common space.

I may have needed something to do, but what I got and continue to get is professional development in an office filled to the brim with wonderful people who are great to work with.

While working with Steve Charles, I’ve had the chance to tell the story of my formative years as a young soccer player and the importance of the people I met along the way. It started off as the story of how I played soccer, it became the story of how the people I met changed my life. Steve and I both learned how divine printer intervention can lead to a new way of telling a story. But I’ve also learned how to write more concisely, which was something I have always struggled with and will, in addition, help my academic writing.

Working in the Communications Office has also exposed some of my weaknesses and has at least presented the opportunity to get better. The one that stand out most is my interview skills. I’m not good at conducting interviews; I always feel like my questions don’t make sense or that I’m going to forget to ask an important question. I get really self-conscious; it’s who I am. Richard Paige has assured me that the person I interview will be more nervous than I will.

“You know what you’re going to ask — they don’t,” he told me, “they’re just as worried about saying something stupid as you are.”

Likely the most intriguing yet frustrating project I’ve worked on is historical sports results. I started with football and now I’m working on soccer for the 50th anniversary season. Intriguing because I think it’s fun to learn about the backstory of over 100 years of Wabash athletics (and when we’ve beaten DePauw, most importantly). This has been easily one of the most frustrating projects I’ve ever done. Record-keeping, especially for soccer in the 80s is lacking. Where and when were games played? I don’t know, but I could tell you the score. So Brent Harris and I are now in the process of researching microfilm in the Crawfordsville library in hopes of finding schedules.

If I had to point at one thing and say “this is the best part of spending a summer in Hovey,” I would say that it’s my professional development. I’m working an almost full-time schedule and I’m working on a variety of different projects that (usually) engage my mind and my interests. I’ve been given the chance to give input and thoughts on recruitment pieces. Most college students wouldn’t spend the summer between their freshman and sophomore years at an ordinary school; but then, I’m not most and Wabash transcends normality.