During calendar year 2015 research says that our Facebook reach was higher than any other college in the country. Statistical analysis, with a healthy dose of probability, indicates we led the nation by a substantial margin.

We have an experienced voice engaged in college social media efforts pronouncing us king.

“We have tracked Facebook data in higher education for seven years, and have analyzed over 3,000,000 posts from 1,400 colleges and universities,” said Brad Ward, CEO of BlueFuego. BlueFuego specializes in higher education social media engagement and recruiting practices. “Prior to 2014, we were able to track data on every page in higher education, but we can now only get accurate data on pages that we have administrative access to.

Those are certainly impressive numbers. Well, it was impressive until last year. Wabash’s Facebook engagement measured 7.7 percent in 2015 with a reach per post of 202 percent.

“That is the highest we have seen in our 7 years of data collection and analysis,” Ward said. “Wabash is 40 percent higher on engagement and nearly 75 percent higher on reach per post when compared to what we once considered the best-performing Facebook pages in higher education.

“Wabash has truly set the new standard and we can say with 99 percent certainty that these numbers are the best in the nation for 2015, and absolutely the highest in Indiana and the North Coast Athletic Conference.”

So for those wondering what the statistical hocus-pocus really means? Allow Mr. Ward to explain: “Reach measures the number of people that Facebook has put content in front of, and we look at that as a percentage of the fan base.  The industry average is around 40 percent, with Wabash at 202 percent.  Engagement is the number of people liking, commenting or sharing the content.  We divide interactions by the number of fans to see what percentage of fans interact with the institution’s content.” 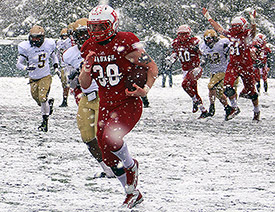 Do your own test. Check out the “likes, comments and shares” on Indiana, Purdue or any of the large college’s Facebook pages and then look at Wabash’s Facebook page. For example, the most recent post is about the college’s Martin Luther King Day celebration. That post reached more than 22,000 Facebook users, had 190 likes, and 97 shares.

One of our best posts of 2015 was Mason Zurek’s late game touchdown run in the snow against Albion. That post reached nearly 118,000 Facebook users, had more than 1,700 likes, and 460 shares.

“Wabash alumni, parents, and students engage in our Facebook page more feverishly than typical web stories,” said Howard Hewitt, Wabash’s Director of Digital Media. “The football photo is a good example of our reach. The Wabash community gets a compelling photo in seconds, then express their pride in the institution by sharing the photo or information with other Facebook friends.”