Patrick Bryant ‘16 – A group of 50 Wabash students traveled to Bankers Life Fieldhouse at Indianapolis Friday night to attend an Indiana Pacers game.  The group of students represented all classes and almost all living units to witness a 96-83 victory over the Miami Heat, conference finals foes of the Pacers from two and three years ago. 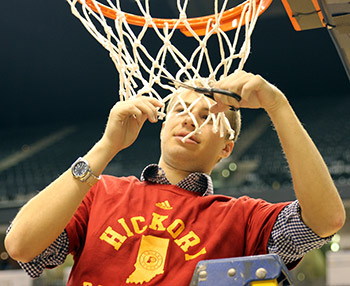 New Student Body President Andrew Powell ’17 cuts down a piece of the net. Each student was able to clip a souvenir.

The trip was planned and paid for by the Senior Council Activities Committee and Wabash College Student Senate, including Student Body President Patrick Bryant ’16 and committee chairman Andrew Powell ’17, who was elected Thursday to take Bryant’s role starting in 2016.

In addition to attending the game, members of the traveling party got to cut a piece of the net down to take with them as a souvenir.

In an impromptu meeting on the court, Chris Denari ’83, television announcer for the Pacers on Fox Sports Indiana, greeted students and explained his job to them.  Despite not expecting a group from Wabash to be present, Denari proudly showed students his ring from the 1982 National Championship basketball team of which he was a part.