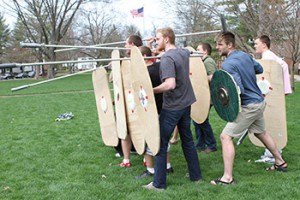 Students in Professor Bronwen Wickkiser’s course Paideia: Citizen, Soldier and Poet in Classical Greece took to the Mall to try their hand at hoplite warfare.  Success on the ancient battlefield depended upon each solider working in unison with his comrades, organized into tight rows called phalanxes.  In classical Athens and Sparta, as well as other city-states, hoplite warfare was essential to the polis.  Each citizen was required to fight, and the use of phalanx warfare reinforced the idea that each citizen was as integral to the well-being of his city as the guy next to him.

The poet Tyrtaeus (7th century BCE) puts it best:
“Let each man, closing with the enemy, fighting hand-to-hand with long spear or sword, wound and take him, and setting foot against foot, and resting shield against shield, crest against crest, helmet against helmet, let him fight his man chest to chest, grasping the hilt of his sword or of his long spear.  … A common good is this for the whole polis when a man holds firm among the fighters, unflinchingly.”

In order to get a feel for this type of warfare, Wabash students armed themselves with shields, spears, and swords, formed into two opposing armies (Athenians vs. Spartans) and advanced against each other, experimenting with various maneuvers. 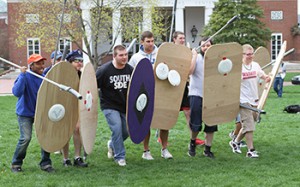 Lessons learned: how difficult it is to move with heavy armor (students wore backpacks full of books to approximate the typical weight—65 lbs.—of hoplite armor), how useful a spear can be at farther range vs. a sword at closer range, and even the sounds of ancient battle, including marching songs (paeans) that armies used when advancing against the enemy.   One student commented that the hardest part of the experience is the discipline necessary to stay in line and not break rank.

Click here to see more photos from the battlefield.

What Wabash Is All About
Student-Professor Continuum