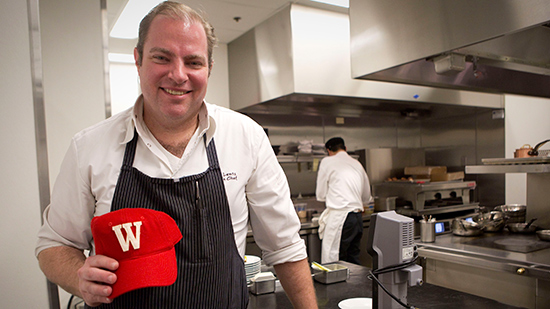 Chef Thomas Lents ’95 in the kitchen of Sixteen at Trump Tower.

Howard Hewitt – There’s fine dining then there is Michelin-starred fine dining. A meal that can best be described as a Cirque du Soleil for the palate comes in 17 plates, matching wine, and impeccable service. It’s delivered on the sixteenth floor of Chicago’s Trump Tower by Executive Chef Thomas Lents ’95. 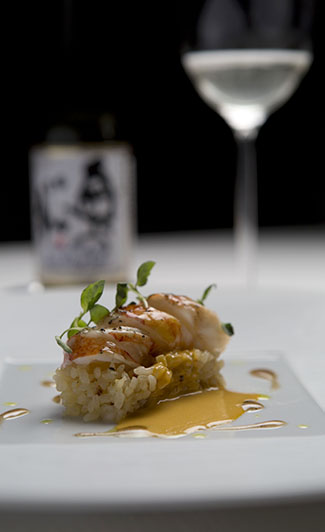 Grilled lobster on rice with uni and coffee, served with sparkling saké.

Lents is executive chef at Sixteen in the newest Windy City Landmark wearing the badges of culinary excellence – two Michelin stars and a top-rating of five stars from the Forbes Travel Guide. And oh, he’s also nominated for a 2015 James Beard Award for Great Lakes Region Best Chef. For non foodies, a James Beard nomination is often compared to an Academy Award.

The Philosophy major and former TKE said in a Wednesday interview his job is about creating the story for the high-end meal. He made it clear that visitors need to leave with more than just a great meal and a big check. The Sixteen chef serves his customers through story-telling and a fusion of dining expectations from the past, present and future. If there was ever a liberal arts approach to dining, it sits in the dining room with the fabulous view along the Chicago River. Its neighbor is city landmark the Wrigley Building.

Lents’ background is impressive in Europe and several of the United States’ top restaurants. He joined Sixteen as executive chef after a stint at 3-Michelin-star Joel Robuchon’s Las Vegas restaurant. Lents served as Chef de Cuisine – the first American-born chef to hold that position for the legendary French chef.

The dining experience – and it is an experience more than just supper – leaves one gasping for the right words. The Winter menu includes a snack starter of four small bites, an appetizer, a first and second course, a main course, then four transitions (think palate cleanser) before dessert. It’s magically paired with wine, beer, and even Sake’ by Sommelier Dan Pilkey.

Lents’ story, the food, and some great photography will be featured in the next issue of Wabash Magazine.