Steve Charles—Ted Steeg ’52 once told me, “If you have a workable and consistent perception of what is in the human heart, you can communicate with anyone, any time, anywhere, through any medium.” 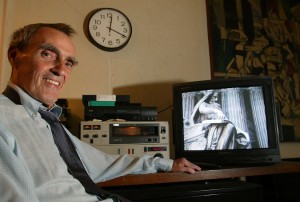 Ted, who died July 7, had that “workable and consistent perception” and practiced it most famously in film. His documentary about Wabash, A Way of Life, captures “the human heart” of Wabash like no other project I’ve seen in any medium. In it we meet Wabash legends like Eric Dean, Fred Enenbach, Vic Powell, and Eliot Williams. We sit on the College mall and listen as President Thad Seymour delights upperclassmen with awful poetry during the infamous Elmore Day, then we watch him welcome with sincerity the new class on Freshman Saturday. And we see Doc Keith Baird ’56, fresh from his work on Apollo 13. It’s like watching your family’s best lost home movies; that is, if Steven Spielberg was the one in your family who liked to play with the camera.

Ted wrote: “What I was really trying to do with the whole film was not just make audiences hear and see what’s great about amazing Wabash, but also feel it.” Watch A Way of Life here on the College’s YouTube channel and you can feel it, too.

But Ted’s strongest medium was face-to-face. He lived “in the moment” all his life and long before the phrase became fashionable. He understood the power (though I can’t imagine him using the term) of simply being present. His friend Dan Wakefield recalls in Creating from the Spirit the day he began expounding to Ted the virtues he found as a beginning yoga student:

At first I thought he was trying to joke away my enthusiasm for living in the moment and shutting off the noise that the yoga postures provided. But that wasn’t it.

“You yo-yo. Why do you think I’ve been playing sports all these years?” Ted challenged. “That’s what sports does—puts you in the moment and shuts down the mental noise.”

Ted and I exchanged many emails and collaborated on several projects, but I recall his presence most keenly from an hour-long conversation we had at Crawfordsville’s Holiday Inn in the late 1990s. Ted had been in town for the first meeting of Wabash Magazine’s editorial advisory board. He offered to meet me for breakfast and talk some more. He was one of those people who put you at ease and, in that relaxed moment, the conversation and creativity flowed. I left feeling affirmed, inspired, and freed to think in new ways about our work here. And with two of the best ideas we’ve ever had for the magazine and which still guide us today.

The poet William Stafford wrote, “I’m saved in this world by unforeseen friends,” and Ted Steeg was one of those friends for many, and certainly for me, for Wabash Magazine, and my vocation here. His presence will be missed by many, especially by his daughter, Amy, his grandchildren, and friends like Wakefield, who in a tribute in NUVO Magazine wrote, “Ted was known to us as ‘The Horse’—a nickname that meant someone who was strong—the one you could count on, the one who could carry the load and never complain.”

Watch Ted’s A Way of Life on the College’s YouTube channel.

Ted reflects about making A Way of Life.

Steeg discusses the most significant event of the 20th century in filmmaking.