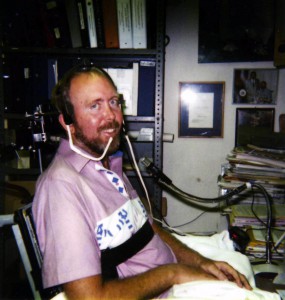 Steve Charles—When I received an email today notifying us that University of Hawaii Professor Emeritus Richard Radtke ’74 had died at age 60 on August 7, I thought immediately of the extraordinary essay he wrote for us in 2001.

His “Making Ice Cubes from Glaciers” was one of the first and few pieces we published as a feature we called Turning Point. I suspect one reason we never received many more submissions for that feature was because Richard’s was so powerful. He set a standard few could meet: Not only had he surmounted tremendous obstacles after being diagnosed with multiple sclerosis at age 26 before going on to become the first handicapped scientist to do research in Antarctica, but he was so deeply honest about it all.

One example from the essay:

“I’m not one of these people who is terminally euphoric. I don’t have a constant production of endorphins that leave me in a state of eternal bliss. At the end of the week I’m totally exhausted and ready to quit. I’m tired of the constant haranguing of administrators and constant roadblocks thrown in my way because I have a disability—the thinly veiled assumptions that I should be in a nursing home quietly resting while the rest of the world goes by. I don’t always wear a smile on my face.

“There are many mornings when I don’t want my attendant to pull me from my bed to feed me my breakfast, but it’s still a choice. I really believe that I have choices. That’s the one thing I do believe in. 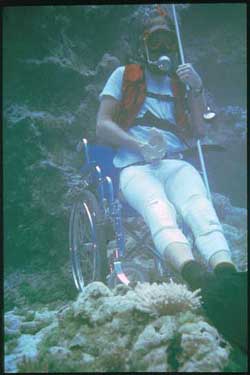 Radtke was an oceanographer and adventurer who would not be stopped.

“When I’m tired (MS leaves you exhausted), I keep working, because if I stopped every time I was tired, I wouldn’t get anything done. Still, at the end of a week, all things considered, I like my life. I’m doing what I want to do, where I want to do it, with the people that I want to do it with. I work outdoors and in inaccessible places, and I have fun.

“It’s been three decades since I last sacked a quarterback at Wabash, but the inner strength and clarity of will and purpose I felt as a player are still mine, even more so. Perhaps they are the uncommon gifts of my physical disability.”

This from a professor and scientist who was awarded a U. S. Presidential Commendation, was the recipient of his university’s highest honor for community service, and was invited to the White House, where he received national recognition as an outstanding mentor for youth.

I encourage you to read the complete essay here. It was written by a man whose life exemplified “Wabash always fights” in ways most of us cannot imagine.