A group of 60 amateur astronomers gathered at Wabash College Tuesday afternoon to view the transit of the planet Venus as it passed between the Earth and the Sun. 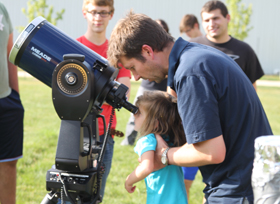 Wabash College Professor Wally Novak helps a young astronomer view the transit of Venus on Tuesday. Novak and Professor James Brown set up telescopes on campus for viewers to enjoy the event.

BKT Assistant Professor of Chemistry Wally Novak set up a standard telescope and a homemade pinhole camera to allow the members of the College faculty, staff, students, and their families watch the event as it took place. The next transit of Venus will not occur until 2117.

View photos from the event here.

“Viewing the transits of planets as they passed between the Earth and Sun was one of the earliest ways to understand our solar system,” Novak explained to the group. “Astronomers centuries ago used these transition to measure the size of the planets in addition to studying their orbital paths.”

Associate Professor of Physics James Brown brought a high-powered telescope with a solar filter so those who came could enjoy a clear view of the transit. People lined up and patiently waited for clouds to clear before eventually watching the event.