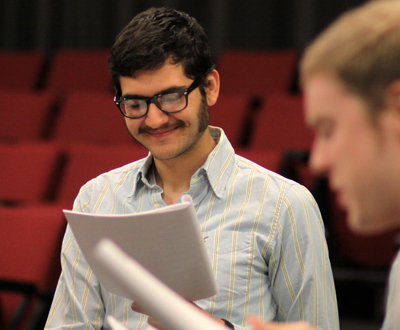 Steve Charles—Three weeks ago Jordan Plohr ’12 kept the audience in stitches with his portrayal of Harpagon in Moliere’s “The Miser,” but the senior’s final appearance on the Wabash Theater stage wasn’t as an actor.

Two weeks ago, Plohr hosted a staged reading of “Tea Time,” his collection of short plays, in the College’s Experimental Theater. See photos of the reading and reaction here.

If the laughs weren’t as sustained as those he earned in “The Miser,” it was only because his plays were much shorter. Fellow seniors Donovan Bisbee and Geoffrey McKinney led a cast that included Raynor Mendoza, and Zach Thompson kept the audience of faculty, staff, and students laughing throughout the lunch hour. Plohr concluded with question and answer session, and was encouraged by theater professor Jim Cherry to expand the characters in one of the vignettes into a longer play.

“I’ve thoroughly enjoyed my time with Jordan and his participation at all levels of Wabash theater,” Watson said. “Even though I was cast in the role of his advisor and one of his professors, I think of him as a colleague and friend.”

“In the College’s most recent production, Jordan played the miser, Harpagon, with such cleverness and skill one might think that Moliere’s character and Jordan were one and the same. Not true. He is good natured with a generous sprit that you can not help but enjoy his company on the stage or behind the scenes.”

As all of us discovered at his reading last week. Plohr will be among 191 seniors graduating Sunday as the College holds its 174th Commencement at 2:30 p.m.