Matthew Sears – The Western Martial Arts Club is more or less a historical battle re-enactment troop. Usually they fight with medieval weapons, but this semester I thought it would be a good idea if we coordinated the activities of the club with my course on Ancient Greek and Roman Warfare. 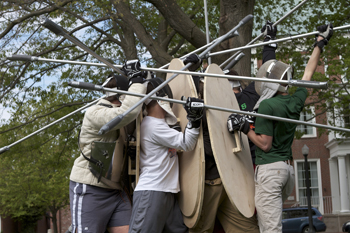 Accordingly, the members of the club made 26 shields out of wood that more or less the approximate dimensions of Roman legionary shields (the rectangular shaped ones). The more oval shaped pieces can stand in for Greek shields as well. The metal poles are the same dimensions as Greek spears, while the wooden clubs are roughly equivalent to Roman swords.

We tried to figure out what men in the rear ranks would have done during an engagement, which of course differed depending on whether they had a sword or long spear. We also had a horde of unarmored barbarians, equipped with all sorts of weapons, charge against disciplined Roman soldiers forming a wall of shields.

Literary and artistic accounts of ancient battles can hardly convey the feeling of actual fighting, and thus it is often difficult for scholars to sort out just how ancient battles played out. Modern films, too, often depict glamorous Hollywood-style fighting that probably bears little resemblance to ancient combat. The aim for today was to try our hand at a little bit of experimental archaeology, leading to a more nuanced understanding of what we have been discussing all semester based on texts and images.