Jim Amidon ’87 — I was in the middle of a rehearsal for Cat on a Hot Tin Roof at the Vanity Theater Wednesday evening when my phone rang. The voice on the other end gave me the sad news that Fran Hollett had passed away earlier in the evening.

The thrill of directing actors in an exciting play practice quickly left me and I found myself overcome with emotions and memories of one of the “Grand Dames of Wabash.”

Many people in this community never knew Fran Hollett. That’s too bad.

But for a couple of generations of Wabash students, faculty, staff, and alumni, Fran held legendary status — and not just because she was married to long-time trustee Barney Hollett (for whom the football stadium is named). 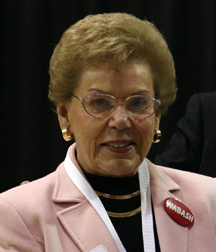 For a College so steeped in tradition, so staunchly independent, and so fiercely single sex, Fran blazed trails. She more then held her own at alumni cocktail parties, post-game rallies, and she was quick to chastise wayward students for missing out on the incredible opportunities Wabash offers young men.

She was the first woman ever named an honorary alumna of Wabash. Think about that.

Founded in 1832, no woman was ever admitted to the College, but in 1985, the National Association of Wabash Men decided that had she attended Wabash, Fran Hollett would have made a helluva Wabash man, er, woman. And so on Homecoming that year, Fran received her honorary diploma and was made “one of the guys.”

I knew Fran for almost all of my adult life. I don’t recall exactly when I met her, but I do remember that it was my friend, Rem Johnston, who introduced me to Fran and Barney at a Wabash football game. Even then, they had an aura about them.

If you can use the word famous to describe an attorney, that would be Barney. He was a partner at Baker and Daniels and was Eli Lilly’s personal attorney. He chaired the Wabash Board of Trustees for a decade. And, together with Fran, Barney rooted on the Little Giants in good times and bad.

When I was a Wabash senior and did the play-by-play for the telecast of the Monon Bell Game, I received a note of congratulations from Fran and Barney — hand-written, old school, and meaningful.

Fran was a gracious hostess, whether welcoming people to events here at Wabash, at College functions in Indianapolis, or in her home.

I’ll never forget receiving a call from Fran when she invited us to attend the Indianapolis 500 with a group of Wabash people. Barney had had the same seats (16 of them) since the 1940s, seven rows up at the end of the main straight, just into the first turn. The cars rumbled straight at us so close we had to wipe bits of rubber tire from our faces and eyeglasses.

Fran brought to the race boxed fried chicken lunches for all of us, and had cut up that day’s Indy Star so that we could all chip in a dollar and pull a driver from the hat — Fran’s little Indy 500 pool.

After the race, we went back to Fran and Barney’s house. I have no idea how she did it: getting all of the things together for the race and still getting home in time to have food in the oven, drinks ready at the bar, and gas in the pontoon boat for rides around the lake. She made it all seem so effortless.

Lest I paint an incomplete portrait of her, it’s important to note that Fran’s graciousness was matched with an equally inspired spirit. She had a raspy voice and when she raised it, she got your attention. Quickly.

Barney was a member of Sigma Chi, and Fran took special care of the student members of the fraternity. No, she wasn’t a house mother, but she helped decorate the new chapter house on West Wabash. And when she visited, if the place wasn’t spotless, the students certainly heard about it. Loudly.

She expected Wabash students to behave as gentlemen, just as her husband had throughout his life. When students strayed from that ideal, Fran was not one bit afraid to call them on the carpet and correct their behavior.

Too many people today will simply look the other way; not Fran. She, better than most, knew that the Wabash formula for success works only when all members of the community buy into the high ideals and expectations, and when accountability has real meaning.

After I had made the announcement of her passing, emails flooded my in-box — memories of Fran and of Barney. Through all of the emails was a common theme: an era had ended, a legend was lost, and there would never, ever be anyone like Fran Hollett to grace us with her presence.