New Home for the College “Brain”

The summer of 2011 was a busy one for the Wabash College IT department. The schedule included the usual upgrade of computers across campus, installation of software upgrades for both individuals and computer labs, and prepare user accounts for one of the largest incoming freshmen classes in the College’s history. Added to the list of normal items was the development of the new college web site, which was completed in August.

However, the department had one more major project that was completed without much fanfare. The entire network server and telephone system room — the “brain” of the College’s computer services — was completely renovated in time for fall classes to begin.

View photos of the project here. 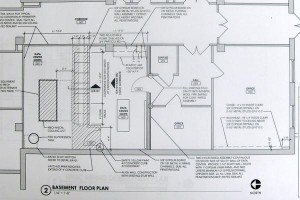 “The most pressing need was to provide a reliable base of operations to keep all of our systems functioning around the clock,” Director of IT Services Brad Weaver said during an open house and tech talk for faculty, students, and staff on Tuesday.

The renovation included the installation of an uninterrupted power supply to the servers, a new air conditioning and handling system to maintain a constant temperature for the sensitive equipment, modification of the systems to a virtual storage system across a series of blade servers. Wiring and fiber systems were re-organized, and security and safety systems were put in place to protect the systems from from possible damage from either natural disasters such as flooding, or outside attacks on the system.

With all of the other projects also needing attention, the planning for this renovation took several months. 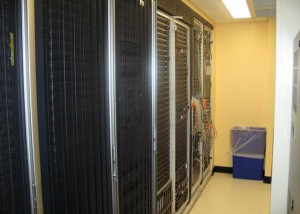 “We developed a time line about six months before we began construction,” Weaver said. “We had a lot of help from campus services and our construction company in planning and executing this upgrade. We made the decision early on to move our existing equipment out of the room during the renovation and into another area. That let us keep things running without having to shut anything down for long periods of time throughout the summer. That helped a lot.”

While the renovation is complete, Weaver and his staff have additional plans to keep Wabash computer systems functioning in emergency situations.

“We have developed a redundant space in Hayes Hall that we use to mirror email, the web site, Moodle, and some of the other systems that we use day to day to function. We still need to look at overall IT services. We still have to address some issues of space and safety as we continue to expand with new technologies. We will need to address those items at some point in the near future.”