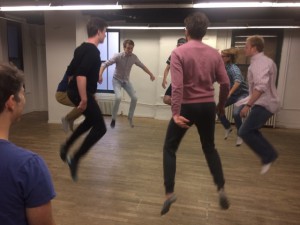 Rory Willats ’17 – It isn’t about knowing a celebrity. It’ about building a community

A week in New York City gave me the opportunity to see some inspiring theater, to eat some unforgettable food, and most importantly, talk to and learn from performers, writers, and other artists working in the city. These are people wading through the jungle of NYC theater every day to find and make their own work. Some of my most memorable talks were with Nick Rehberger, Jack Moore, Ashley Black and Emily Koch. My biggest take-away from these conversations was a shift in my understanding of an old cliché; “It’s who you know”. It truly did seem to be that who you knew mattered to finding success in the city. It wasn’t, however, though helpful, dependent on knowing a celebrity or bigwig in the theater scene. Rather, who you knew was about who you had as a support group. It’s more about your cohort, the friends to remind you of your passion, to keep you on your feet, to find a way to enjoy a 400 sq ft. apartment in a city where leaving that apartment seems to cost $20. 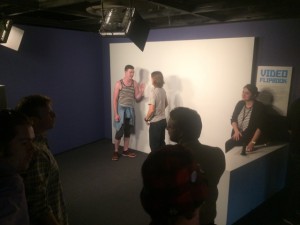 Acting with the Camera exercises at The Museum of the Moving Image in Astoria, Queens.

Originally, I thought “It’s who you know,” was a bitter way to express dissatisfaction that the theater scene isn’t a meritocracy and that, “if only I had known the right person – that’s all it took for what’s-his-face and I’m better than him!” And there is certainly merit to looking for upper connections in the business to learn from the best. In our lunch talk with Jack Phillips Moore, Literary Associate at The Public, he encouraged us to email those in the business we admired and ask to grab coffee and talk about their work. After all, “everyone LOVES two things: coffee and talking about themselves.” Jack emphasized that people in the business recognize the struggle of the emerging artist and usually want to help. I took from this that it is advantageous to know people in the business, to find the best and learn from them. However, that doesn’t have to be a product of fate. Rather, you can take it upon yourself to meet the who’s of the, “who you know.” It isn’t that the only way to make it in New York is to have a connection when you move. You can move and make the connection.

Jack also talked about how through connections with friends, through being willing to work hard and developing a cohort, the connections that create a career are made. He told us to volunteer to help on as many projects as possible. Which will later yield work is impossible to know. His position at The Public stems from a job he got only because a friend of his told him about it and encouraged him to apply. Similarly, Nick Rehberger, who played Fyedka, and Tess Primack, ensemble and swing for four roles in the production of Fiddler on the Roof, talked after the show about their journeys to Broadway. Both leant heavily on their friends from undergrad for support and business connections. They told each other about auditions and entertained each other through nights of crummy apartment living and rejections.

This was reinforced when I met Emily. After our last show of the trip, I stopped by a friend’s birthday party. I had met this friend, Stephanie, at a workshop for a show the previous summer. I didn’t, however, know any of her friends. Nervously, I started chatting with the woman next to me. I would later find out that her name was Emily, she had just left a run of playing Elphaba in Wicked for two years and that she wasn’t allowed to talk about her next project. She was tearing up the city, knew great connections and now I had met and befriended her. All through a connection from a weekend-long gig months ago

Originally I found the phrase, “it’s who you know,” disheartening. I don’t have an agent. I don’t know casting directors. I know very few people in the city. However, now I realize that what’s more important is knowing good friends, building a good support system. And now, I’m encouraged by the phrase. I’m graduating with a strong, caring and generous cohort from Wabash and am ready to lean on them for support and inspiration as I tackle the theater scene at large. 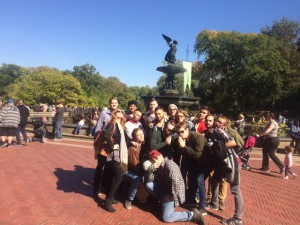