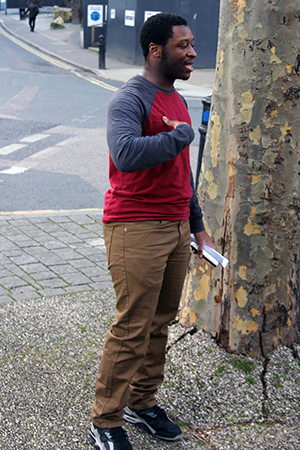 Springer makes his presentation to class.

Herchel Springer ‘17 – Today in London, was a very eventful day. It started out with the tour of the West End Theaters, in which I saw The Globe Theater, Shakespeare’s Globe, and The Windmill Theater. Theater is real big in London and it is part of the culture so it interesting being over here and learning about the history of certain theaters and also the people such as William Shakespeare, Henry Irving, and many more.

Then after exploring that I did a presentation on the architecture of The Globe Theater, Blackfriars Theater, and Shakespeare’s Globe.The most important thing about the architecture is that it is so grand and it catches the eye. The buildings seem to still have an old architecture to them, but also mixed in with new buildings and their style.

Later on in the day we went to the play Man and Superman which Ralph Fiennes is apart of and plays the main characters John Tanner and Don Juan. The play itself was very pleasing to watch, but the action of the play did not come about until the second half. It plays on the idea of romance and one person not wanting to commit to another person.

The experience in London so far has been great and breath taking and I thank Wabash College and Dr. Dwight Watson for making this possible and also to my classmates and other professors for making this experience more  enjoyable.

Nathan Muha ’18 – Today was truly a sight-seer’s paradise. Climbing up from the slowly-getting-familiar Underground station, we walked straight into the middle of Trafalgar Square and the plaza of the National Portrait Gallery. Seeing the huge statues around us, including a bout on top of some lions and a modern horse-skeleton sculpture with the stock market statistics running, it was difficult to take in. Big Ben seemed almost eerily defined against the grey sky just down the road. 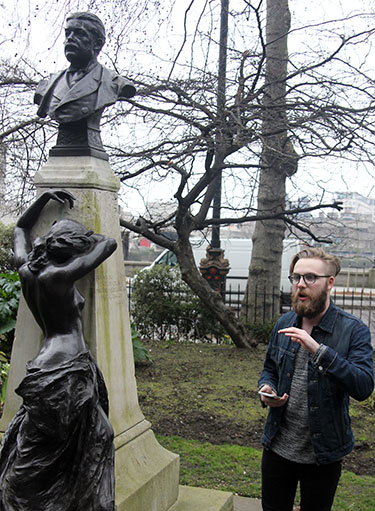 Taking in some of the sights, we also took the numerous famous locations as places of education with a good few of our presentations. In one of the many gardens we went through, I gave a presentation about English producer George Edwardes at the memorial site of his contemporary Arthur Sullivan. During a walk through the theatre district, we also heard presentations on Charlie Chaplin, Benjamin Britton, Henry Irving, and other topics of interest.

We finished off our walking tour with three of the most recognizable locations in London: Buckingham Palace, Westminster Abbey, and the Parliament building. Needless to say, it was breathtaking, and I could not do it any justice through words.

Our theatrical review for the night was War Horse, which many people know from the film adaptation made by Steven Spielberg. One word that would really describe this play was theatrical. The production value was completely out of this world, with life-sized ridable horse puppets, singing, interpretive body work with the sets, and music playing in the background for a good majority of the play. The group agreed that all of those aspects were stellar. Today ended
up being truly remarkable, and a day that I’ll remember for a long time to come. 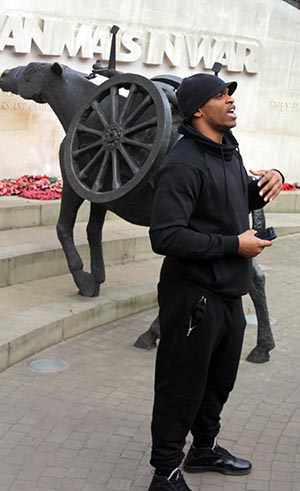 A.J. Clark ’16 – Participating in this immersion trip to London has been a great experience thus far — and I have only been through the first day! It is exciting to see the diverse the city of London. The most memorable trip we took today was to Hyde Park. We visited the ‘speaker’s corner’, which is a space in the park where multiple people get on a soapbox and rant about whatever their grievances are. What is interesting is the number of people who take time to stop and listen to each speaker; hundreds of citizen’s and tourists visit the ‘speaker’s corner’ everyday. You can chose to engage in the conversations and attempt to have a productive discourse; or you can watch other people have unproductive civil discourse by arguing and yelling — which is very entertaining in itself.

Another aspect of the area surrounding Hyde Park I enjoyed was seeing the architectural memorials dedicated to horses and other animals that were used in World War I. I was so interested in the memorials because the research project I conducted for the immersion course dealt exclusively with the stage history of War Horse, which is a novel about a horse’s experience in the First World War. The information I researched told me about the deep reverence and respect the English culture had for horses, especially pertaining to their involvement in the war. Visiting the various memorials/statues dedicated to horses reified my understanding of the English culture’s ‘love’ for horses, which were used ubiquitously during the war. Horses were used to perform several tasks from supporting cavalrymen to hauling mass weapons as beasts of burden.

AJ Akinribade ‘15 – So about that flight in … smooth and easy! Comfort was the name of the game. American Airways had music and movies to my fashion, great food and beverages catered, and awesome service. My first experience on an international flight was a pleasure!

We arrived in London to a cool, calm, and breezy day! For a major city everything seemed polished. The streets were clear of litter, the cars were fancy (the old fashioned English cabbies caught my attention early), and the people were beautiful. Everybody seemed well put together here — comparable to New York City.

We dropped our bags off at the International Hostel and off exploring we went. Our first stop was Speakers Corner. At the Corner people got on their soap boxes and passionately argued their displeasures to any crowd who was willing to listen. One Islamic man tried to use the Quran to deconstruct the Bible and Christianity. Many argued against him rather than sit there and listen. A sub-group of young people formed and engaged in debate over issues of the controversial Racial Contract. Another group of men shared their very sexist views on women in society. The most interesting speaker of them all was the cynical man with a megaphone — not allowed. He was simply there to tell everyone to relax, meditate, and laugh. He kept reminding everyone that what they’re really mad about is usually not the root of their anger. Although he was weird, his sort of optimistic angle at life was different; it was a breath of fresh air at the Corner.

Our next stop was the memorial to war animals where Junior (AJ Clark) gave a nice presentation on the topic in novel, stage, and film depictions. We took pictures and paid homage to the animals by talking Junior out of harassing the pigeons. We also caught the attention of a few London pedestrians who clearly knew we were from the States. We went on to explore Hyde Park and navigated the Oyster a little bit (London’s subway train). We also stopped in a basilica/cathedral and listened to an organ recital. Very soothing. We then dined a little and appreciated the diverse culture within a nice London restaurant.

This was my first time (that I can account for) across the pond and day one in London was a success!