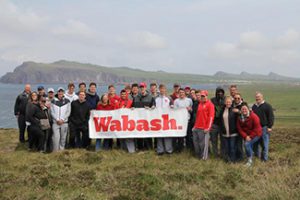 Jack Hegwood ’22 — As we’ve reached the halfway point in our trip, I have learned more and have been left in awe more than I could’ve imagined. I knew of the beauty of Ireland through pictures on the internet and through the testaments of those who had visited before. In my time here, so far, I have realized that none of what I had seen or heard about the country’s beauty did justice to how truly beautiful this place is to the human eye. We have seen a wide variety of attractions from small cities to rural mountains and every single sight exceeded my expectations. The experience that opened my eyes the most, though, was our time spent in Galway.

Before the trip, I perceived Ireland as Dublin and just a bunch of farmland. Our stay in Galway opened my eyes to the fact that Ireland has other cities that are rich in history while also being able to modernize.  Galway was a beautiful city filled with activity as shops and restaurants lined the streets that were filled with people. It was neat to walk around the city, the river that ran through it especially, and feel like I was in a historic city that was filled with a younger demographic.

The history of the coastal city that stuck with me the most was in the St. Nicholas church and the Cathedral of Our Lady Assumed into Heaven. Both of these buildings had beautiful architecture all over and most of it had lots of background information and meaning to it. At the St. Nicholas church, they had a section of the church dedicated to the family history of the parishioners and coming from an Irish family, I thought I may have family that belonged to the parish. I found out I did not but this sparked by interest in learning more about where I have family ties in this beautiful country.

Drew Fleming ’22 — Ireland has been an amazing experience. From learning about the differing cultures, to the beautiful scenes all around, my expectations have been more than exceeded. Everything I have witnessed on this trip has positively impacted me. Ireland has given me a new appreciation for other cultures and has sparked a great desire in me to travel to other countries. I have truly enjoyed everyday in Ireland and thought this trip has been very beneficial to our team.

This trip has been filled with amazing excursions containing scenery that cannot be described with words. I have particularly enjoyed the dolphin tour in Dingle and the Dún Aengus Hillfort on one of the Aran Islands. I enjoyed these because I saw a new kind of beauty in our world. People are able to see some of these things in videos and pictures, but they can’t show the true beauty of this earth. On the tour in Dingle, we came across a pod of dolphins with about 80 members. One of our tour guides for this excursion explained this is rare and only happens once a month at most. This fact truly astonished me because these dolphins are such fascinating creatures. We originally went on this tour hoping to see a couple dolphins and were more than speechless when we encountered the pod.

This trip has been nothing short of incredible, and being able to experience these kind of things with my teammates has enriched the experience even more. We have a great group of guys and it was amazing to get to share these experiences together. I will remember this trip and have memories with these other guys for the rest of my life.

Evan Nichols ’22 — Hello my name is Evan Nichols of 22’ and I am a Wabash basketball player that went on the Ireland trip and I would like to tell you about my life changing learning experience. When I was on tour I learned about the Claddagh ring and the tradition of it. When it points towards the finger nail it means that a person is single male or female. Turned towards the knuckle means that the person is taken, engaged or on left hand they are married. The team went to an Irish club and there were women that had the traditional Claddagh rings. When I saw one towards the nail I inquired about what we had been taught and sure enough she did not have any sort of significant other. This showed me that Irish traditions were still upheld today and the depth of what we had been taught on these tours.

In Galway I got a refresher on my classics and religion class as we talked about Cromwell and the religious struggles of the Irish. We learned about what happened to churches during the Iconoclast era and how various images were destroyed as they were viewed as worshiping idols. In fact, when we were at the Cashel Murphy on the Dingle peninsula we learned about beehive houses and how it exists as a  defensive fort because of the bay it overlooks and during that certain area Cromwell and his troops destroyed a pagan artifact because of the transition to Christianity he desired for the Irish people. There was also a little area under the house that was a small subterfuge that was a narrow hallway that was hard to get into and has a small room with vents that circulated fresh air and still work even today! They couldn’t be smoked out of it and because it was hard to get into they could spear any enemies that tried to enter the underground hallway and room. This place is also memorable because of the spiders that two of my teammates encountered that were also in the underground area saw. After some research we believe the spider was a False Widow and the two spiders looked to be around the size of a silver dollar. It was memorable because of the yelling and the fast crawling that occurred after they killed the spiders to get out of the subterranean area.

My overall experience in Ireland has been life changing as it is my first time out of the country because I couldn’t personally afford to go overseas. This makes me grateful for everything that all alumni have done to make this possible for me! I want to give back to the college so that other Wabash men in the future can go on a trip like this and experience what I have experienced. This trip makes me want to come back to Ireland again some day and show everything I know to someone else. This is a once in a lifetime experience that I got to go on for very little cost to me that will forever have a place in my heart and I will leave with lasting memories, a greater knowledge and understanding of Irish tradition and history and a greater bond with my teammates and fellow Wabash men. Thank you and WABASH ALWAYS FIGHTS!

Zach Anderson ’21 — The thing about Ireland so far that I have thoroughly enjoyed, are the views and landscape. I was under the impression that the land was flatter and more so fields. There are quite a bit of mountains that have caught me off guard. My favorite experience so far would definitely be the Aran Islands and the Dingle Peninsula. Both had amazing views and very steep cliffs right on the water. I absolutely love the ocean so seeing from a top view at the islands (looking down) and a boat view during our dolphin trip (looking up) around the peninsula was extraordinary to see the difference between the two.

Connor Rotterman ’21 — When I first heard that our team trip was going to be in Ireland, I just thought to myself “there are so many better places we could go than Ireland.” Man was I wrong. Ireland is absolutely incredible. I have never seen such a beautiful place. It is by far the best place I have visited. Experiencing it with all of my friends just makes it that much better, and I’m very thankful that we were able to have an opportunity like this.

Jack Davidson ’21 — This trip to Ireland has already been a life changing experience. Throughout various tours, I’ve gathered further knowledge on significant places and structures in Ireland. Specifically, the Dingle Peninsula tour offered tremendous views and a plethora of valuable information. Through my presentation on the Rahinnane Castle, I was able to analyze the significance of the castle and its effect on Ireland. Additionally, after listening to other presentations by my teammates, I gathered further information on the history of Ireland and the significance of important places and structures. Overall, the best part of the trip is being able to experience this once in a lifetime opportunity with my teammates and family.

Matt Chinn ’21 — I honestly had no clue what this trip would be. I’d never been anywhere but the US and I didn’t really know what to expect. The biggest thing for me has been the different natural formations we have seen. To have see how water can erode the the land and create the massive cliffs we went to was incredible. The peninsula was equally amazing. Likewise, the assembly of alcoves and bays that we saw were beautiful.

The coolest part of the trip has been doing all of these things with my teammates. Doing it alone would still be a good time don’t get me wrong, but my teammates make everything so much more fun and exciting. In the end, I may not remember the exact geological features that I had seen, but I will always remember the memories that me and my teammates created.

Parker Manges ’21 — Going to a small college in a small town in Indiana may not seem like a big deal. Small colleges may pose a threat to people who want to the see the world. However, choosing the right small college, like Wabash, resolves this issue. The basketball Ireland trip is one way how Wabash has helped change my perspective on the outside world. As this trip has not yet ended this group of men and I have seen unforgettable sites such as the Dun Aonghasa, looking 300 feet down the side of a cliff, seeing a pod of 80 dolphins swarm around our boat, or crawling into a man made underground hole that is 4000 years old. These sights will forever stay with me. However, the biggest impact this trip has been for me to see the people that live in other countries like Ireland. Interacting with the locals throughout the day and seeing the joy of sharing their country and culture with foreigners is something I personally have never experienced. From this I will take away the idea of being present, open minded, and sociable to every new person I meet in the future. This Ireland trip has been truly incredible.

Harrison Hallstrom ’20 — This trip was something special for sure. Having the opportunity to tour a vast amount of Ireland in 9 days was very exciting. My favorite city among the several we visited was Galway. A large reason for this being castle walls and other pieces of a castle still constructed through the city along with new buildings being built on and around these old walls. Another reason being that I thought the friendliest people I encountered in Ireland were in Galway along with their night scene being the most fun for the team in my opinion. Something fairly simple that I learned along the trip is that Ireland has a president with a 7 year term along with a prime minister. The president being more of a figure head in their government and commander and chief while the prime minister controlled a great deal of other tasks. Overall, I am going to remember this Ireland trip for a very long time and cannot thank Wabash College enough for providing the trip!