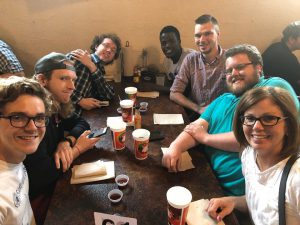 Mitchell Homan ’18 — This morning I walked through the doors of Kingsbury High School passing the pull out metal detectors and turned to walk down the empty hall students would fill in 15 minutes, to my classroom. I arrive and begin helping my host teacher Mr. Gong with the Kingsbury Garden. The 15 minutes pass quickly and we stand in the hall watching students as they pass through the metal detector and are wanded by a security guard. As the homeroom students shuffle into the class they sit down quietly and begin ignoring the announcements. As testing has continued for over THREE weeks, students had become familiar with the long list of make-ups test takers. This list included about half or more of the classroom leaving 7 students left in the classroom. While testing was taking place students were not allowed in the halls leaving the morning to homeroom classes. These classes were not the subjects that the teachers taught. This being so, no formal lesson was given this morning. So, the students were left to their own methods of distraction until lunch. This showed me how flexible teachers must be in order to follow the rules of standardized testing set by the state. It also showed me how far behind standardized testing has put students in terms of achieving their education (1 week and 3 days so far in Kingsbury). I hoping that Mr. Gong and I are able to pick up the education of minds tomorrow! 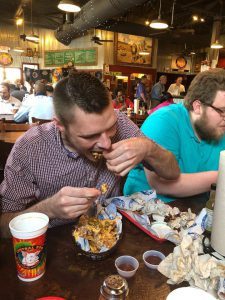 After the morning at school I joined the group at Central BBQ, a place known for their hot wings and nachos, so like a true Wabash Gentleman…I ordered both. The food was amazing and a great energy boost for the Civil Rights Museum and local tour with Memphian and Historian Jimmy Ogle. At the Civil Rights Museum, I experienced powerful emotions about the past of the United States. Learning about the Civil Rights Movements in my high school held much of the same information, it didn’t have the emotion that was held in the videos and audio logs. The past we held was dark and occurred not that long ago, and is still happening in parts of the US today. After the Civil Rights Museum self-guided tour, the group met with local Memphian Jimmy Ogle. Mr. Ogle has shown me not only the rich history that has been growing in Memphis, but also how similar Memphis is to the small towns we love in Indiana. As we walked down a street we were stopped several times by locals who knew Mr. Ogle and even were honked at by a FedEx driver who knew Mr. Ogle.

After the tour with Mr. Ogle, the group (along with Mr. Ogle) met several Wabash alumni present in Memphis for dinner at Belly Acres. Here we were able to catch up on experiences they remember from their time on Wabash’s campus. Professors they had on comps boards, connections they had with each other, and stories the alumni shared with the professors we students make stories with now. The sharing of experiences and stories between generations of Wabash men is one of the longest traditions still held at Wabash and I am glad to have been a part of that tradition tonight.