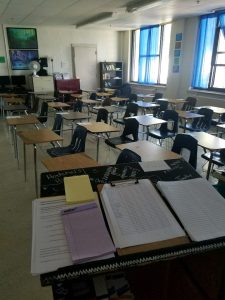 Charles Frey ’19 — It is 7:25 on Monday and the morning announcements have been buzzing through the speakers for ten minutes. Students are still trickling into homeroom and pods of friends are chatting in the hallway. Although school starts at 7:15 officially, the students and teachers know school truly begins when the announcements end – around 7:30 daily. Once the voice on the other end stops, it is time to get to class. True to time, 7:30 rolls around, the announcements come to an end, and the stragglers enter Mr. H’s homeroom class.

At this point in the day, because this week is a “B” week, Mr. H would normally be teaching his “B Schedule” classes (Kingsbury is on a block schedule – 4 class periods a day, alternating “A” and “B” schedules by week), but this is the third week of standardized testing. Mr. H’s students head to their assigned locations for a standardized Biology test. In the afternoon, another test, this time in Chemistry. Mr. H, despite his title of “teacher,” is not teaching today. In fact, due to the testing schedule and mishaps of the TNReady exams, Mr. H hasn’t taught a full lesson for three weeks, with the last time he saw his A Schedule classes being about April 26 (he thinks it has been about eight days since he last saw them). Luckily on Tuesday he’ll be able to teach one of those classes after a morning test.

So, to compare my Wabash classroom experience to my Memphis classroom experience, it was exactly what I’ve read and nothing like I expected. In the news articles we’ve dissected (chalkbeat.org is a great resource for education news), I knew that our class would be observing urban education through the lens of testing. Not only are we visiting in the middle of testing, but we are in the middle of testing that should have been completed about a week and a half ago (April 27 was the originally planned last day of testing). Instead of observing urban education in action, I experienced the systemic issues that plague the national obsession with standardized tests.

All that being said, I did learn a lot from Mr. H. We talked about the importance of principals (the argument of “discipline distributor vs. morale manager”), the pedagogy of teaching any subject (every teacher is an English teacher, when you think about it), and the specific strategy he uses when he develops lessons for his English classes (Read. Think. Write). We also discussed how building a community is one crucial aspect of education that is often overlooked, and one that is brushed aside during testing time. At the end of the day, I remember that Mr. H had more “Good mornings” and “Good afternoons” from students than other teachers in the hall, and for me that is more important than any test score.