Dec. 24
Ho Chi Minh City via Parker Redelman ’18
We came to Ho Chi Minh City, formerly Saigon, and visited the old Post Office, Notre Dame Cathedral, Reunification Palace, and War Remnant Museum. Being in Ho Chi Minh City, it is interesting to see how French and U.S. culture has impacted the life in the south, as well as the steps that were taken to unify Vietnam since the end of the war. 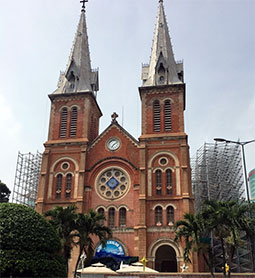 The old Post Office and Notre Dame Cathedral are next to each other leaving the legacy of French influence. Right down the road, the Reunification Palace reminds us not only of the separation of North and South, but also the tanks that took down the front gate at the end of the war are still on site. The War Remnant Museum gave us the Vietnamese perspective of the War and how it is remembered.

This is the last stop on our travel list and as we have traveled south through Vietnam and seen quite a transition from lifestyle to economy, to traffic, and to food. A telling example of this transition is gas stations. In Hanoi and Hoi An, there is only one gas station that drivers can use. In Saigon, however, this same gas station has at least three other competitors. The amount of economic 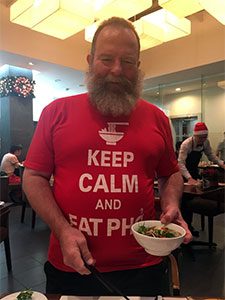 activity present in Ho Chi Minh City eclipses that of anywhere else in the country, as a Starbucks sits next door to our hotel.

Whether in in Hanoi or Ho Chi Minh City, the presence of marketplaces, scooters, and pho’ remains constant. However, the influence of American companies can be seen around almost every corner in the south. The number of people driving seems to have doubled, and the pho’ is much sweeter than that of Hanoi. As explained by our tour guides and confirmed by our own eyes, life in the southern part of Vietnam is much more open and westernized.