After a nice relaxing bike ride through the rural areas of Hoi An, we arrived at a garden with a restaurant. 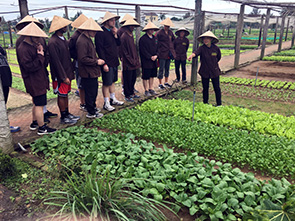 Gardening at Hoi An.

During our tour of the garden, we wore traditional Vietnamese gardening clothing, and we were able to smell each of the plants growing in the garden. We were even taught how to grow produce the way that they do, which included using seaweed for fertilizer. This was a truly immersive experience into Vietnamese culture, and it showed us how much hard work goes into growing fresh produce. The produce here seems to have a much cleaner taste than the produce in America, probably because they use fewer chemicals and seaweed instead of manure. After our tour of the garden, we were taught how to make our own Vietnamese pancakes, which were similar to omelets in the United States. Each of us cooked our own food, which was absolutely delicious. 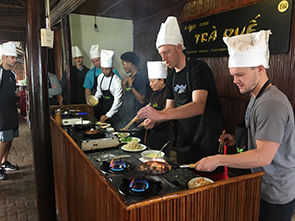 The pancakes were made of eggs with chicken, shrimp, and vegetables inside. These immersive experiences reinforced the amount of respect that the Vietnamese farmers deserve due to their hard work.

We ventured to the Son My Memorial to witness the site of the My Lai massacre. The memorial was separated into three distinct sections: a museum, the remains of structures destroyed in the attack, and a memorial garden. The museum set the tone for the memorial, displaying prominently the list of every resident killed by U.S. GIs upon a granite slab, numbering over 500 men, women, and children. Outside, the foundations of homes that survived the destruction remain in their original locations, adorned 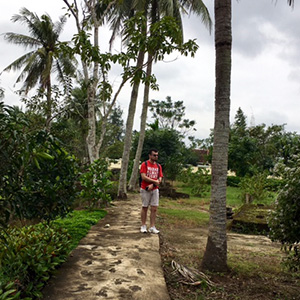 Walker Hedgepath at the Son My Memorial.

with plaques of whom was slain that lived inside. Lastly, at the front of the memorial, a large, beautiful memorial garden sprawled onto two mass graves neatly trimmed and carefully maintained, providing a colorful contrast to the dark grey graves that lie behind. Overall, nearly 50 years on from the massacre, the scale of the destruction at the site is still breathtaking. The surrounding countryside no longer contains the original jungle vegetation – new trees have been planted, much smaller and more homogenous than the lush rainforest lost to defoliants. All that remains of an entire village are a few cement foundations and small pots of incense commemorating lives cut tragically short.

Even with these painful reminders of atrocities 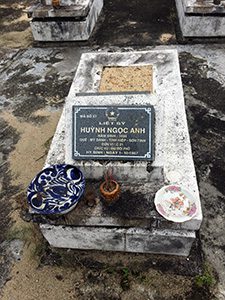 committed by our American forces, there still pervades a new sense of hope. Wabash College was welcomed into Son My and Vietnam generally by gracious Vietnamese hosts that are eager to share their perspectives with us to encourage

mutual understanding. Additionally, the signs and memorials at Son My were not just in Vietnamese – they were translated into English for clear international understanding. Above all, Son My was no longer just a site of tragic loss – now surrounded by a bustling town, Son My is a testament to humanity’s ability to overcome hatred and war. Our warm welcome into the community is a sign of just how far Vietnamese-American relations have come in fostering this new reality.