Tuesday was filled with what felt like a traditional introduction to Vietnamese culture and its people. Immediately, our class was struck with the importance of Ho Chi Minh – his life, image, and memory – to Vietnam. His mausoleum is isolated yet accessible to all Vietnamese. Young and old Vietnamese were scattered throughout the line to the mausoleum, while thousands of visitors filled in the rest. We marched in a single-file line around Ho Chi Minh’s embalmed body, no pictures were allowed at all. The Vietnamese flag/symbol (a yellow star 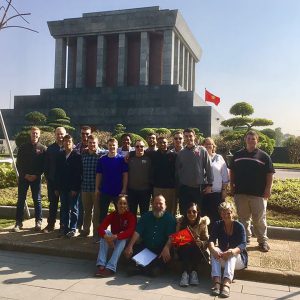 stamped on a red background) was adjacent to the communist symbol. It was quiet in the dimly lit room. Four Vietnamese soldiers dressed in white military uniforms, and more soldiers supervised the behavior of the line. At first glance, a Westerner is understandably uncomfortable. But it is not because of the communist environment, or even the deification of the great uncle of the Vietnamese people (after all, one must also understand that we follow similar practices in the United States with Washington, Jefferson, Lincoln, Dr. Martin Luther King Jr., etc.). Rather, it was the immense reverence with which the Vietnamese people hold Ho Chi Minh. It was both humbling and clarifying, as it shows the role Ho Chi Minh plays in Vietnamese history.

In addition to the mausoleum, another fascinating visit that pushed me out of my comfort zone as a Westerner was the Hoa Lo prison, better known to Americans as the “Hanoi Hilton.” Far from a luxury hotel, the Hanoi Hilton was regarded as one of, if not the worst prison camp for American soldiers during the Vietnam War. However, this prison was established by French colonialists in the early 20th century. While the prison was under colonial control, political prisoners and general criminals were incarcerated, and sometimes tortured, within the stone walls. As I walked into one of the cells – about five feet in width and eight feet in length with an untouchable shoebox-size window at the top of the cell wall – I touched the walls and listened to the inaudible history of tortured souls, both American and Vietnamese. Indeed, the Vietnamese narrative of the treatment of American prisoners was off-balanced and erroneous. However, this is to be expected when the state controls the narrative. As frustrating as it was, it also put me – a white, upper-middle class male from the United States – perhaps into the position of a Vietnamese individual who reads an American narrative of the Vietnam War. The point of the experience was not that the torture of Americans was glossed over (or even whitewashed and erased), but the fact that, for the first time, I was placed in the minority category of a culture. At the end, I wrote in the guestbook, which asked for reviews, to remember that memory extends beyond national boundaries. As frustrated I may have been, it was an indescribably invaluable experience.