History professors Rick Warner and Sabrina Thomas are leading students on an immersion trip through Vietnam as part of the HIS 300 “Lessons and Legacies of War: Vietnam” class. This class focused on the ways in which the Vietnam War has been remembered in the United States, the factors that have shaped that memory, the different groups involved (soldiers, veterans, antiwarriors, families, etc.) and the effects of that memory for the country.

Also discussed were the ways the Vietnamese experienced and remembered the war – both those in South Vietnam, U.S. allies, and the Viet Cong, allies of North Vietnam. Ultimately, students are considering what lessons have been learned from this war, what our memory has taught us and neglected, and why both are important to recognize.

There are modern day implications for these lessons from the ways we think about U.S. military power, veterans’ services, and current foreign policy tensions.

The trip will take the group to all three sections of the country, beginning in Hanoi, then fly to Central Vietnam – Da Nang and Hoi An – and finishing the trip in Ho Chi Minh City in the South. Student thoughts are shared here. 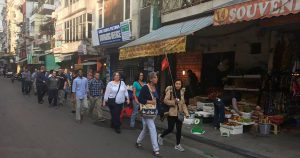 A walking tour of Hanoi.

One day in and I can (almost) say with confidence that I have figured out how to not get hit by the litany of motor bikes rushing through the narrow streets in every direction. It’s sort of scary, sort of awesome. I was expecting to get barked and cursed at numerous times when I was in the way of honking motorists, as is the case when walking through the streets of Chicago. But eventually I realized that the honks were more like suggestions or notices from the biker, there was an ebb and flow to the entire walker/driver relationship unlike anything I have experienced in America. I’m fairly sure that Vietnamese drivers are much more precise than the speedy American, for there were numerous occasions where I was certain two bikers were going to crash, even into our own tour bus, only to narrowly skim on by and continue on as if the other biker or bus wasn’t even there.

My first day in Vietnam was unlike anything I have ever seen. As soon as we got off the plane, I noticed that there was a vast amount of farmland and buildings with French-influenced architecture. The walking tour of Hanoi that we went on later however was the true eye-opening experience for me. Motorbikes and cars flooded the streets and you have to be on alert at all times or else you will get hit. There were horns constantly honking and small shops filled the sidewalks with some owners persistently trying to get you to purchase one of their goods/items. The first day here was an incredible experience, I can’t wait to see what the following nine days have in store for our group. 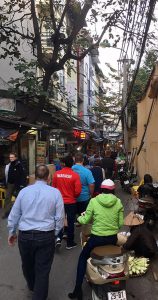 Wabash students on the move in Vietnam.

Our first day in Vietnam was awesome, but getting there was no feat.  After 27 total hours of traveling and not seeing daylight for nearly a whole day, we arrived in Hanoi, Vietnam.  Hanoi

is a beautiful city that immediately took me by surprise.  It is crowded and bustling no matter what hour of the day it is.  On our walking tour we were able to take to the streets where we had to weave between the hundreds of motorbikes and citizens who each were busy at their own tasks. Finally, we were able to have dinner together at an amazing restaurant that offered us around 8 courses of food for the meager price of $12.  I think I could get used to this place!