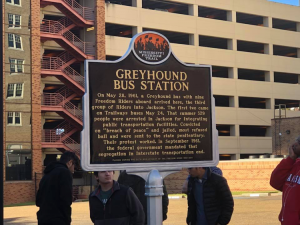 Brian Parks ’18 — The today was a really interesting day. We took a walk through the downtowns of Jackson and Meridian downtowns. When we arrived in both cities the location seemed like a ghost town most likely because it was Thanksgiving Day.

We first started in Meridian and something I noticed that was really strange that they had a lot of horses made of stone throughout downtown. I assumed that the town really loved horses and were used abundantly in the past. However, I did research on the horse figures and I found they were used to promote community pride, spur tourism, instill an appreciation for art and to help the children that are orphans. I found this very fascinating about the city. 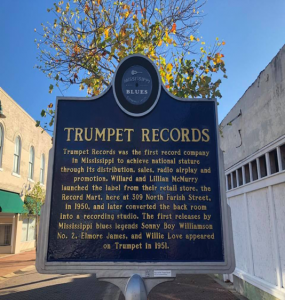 After the short trip in Meridian, we visited Jackson Mississippi which was very memorable. We first took a long walk throughout downtown and through a neighborhood. I quickly noticed how run down the city looked from an economic sense. Although it seemed like an underdeveloped environment we still saw monuments with a rich history. We walked by many music commemorations of Blues and learned the impact it had on the city. Some of these industries included Okey Records and Trumpet Records which are very prominent studios in during their respected times. After seeing the rich music history of Jackson our next stops were of very sad moments during the Civil Rights Movement.

We visited Jackson State University and Medgar Evers house where he was murdered. At both of these locations, you can see the sacrifices of people lives lead to the success of the Civil Rights Movements. This reminded me of the quote by Fredrick Douglas, “If there is no struggle, there is no progress.”

This made me appreciate all those who paved the way for all minorities and myself. There are no words that can do justice to give the men and women gratitude and respect they deserve and who gave their lives to people then and generations to come.