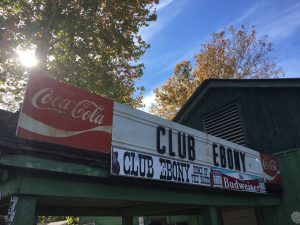 Luke Rowles ’19 — This experience has been eye-opening. I have seen things that I never thought I would get to see, I have visited places that I have always wanted to go, and I have developed a deeper appreciation for a multitude of things. Visiting these towns and seeing the unmistakable poverty is heartbreaking. Visiting these museums and learning about the racism and bigotry that existed is unnerving. Many times, I found myself shaking my head, wondering how anyone could let these things happen or think that it was okay. It’s comforting to know that we have made great strides, but we still have a long way to go.

I have greatly enjoyed learning about how music played an important role in making those strides. Today we drove from Jackson, Mississippi to Indianola, Mississippi moving up the Delta, passing open fields, many of which were used for cotton farming. As we rode, we listened to blues music. Much of the old blues music talked about the hardships that African Americans faced, including picking cotton during slavery, so it was emotional to pair the two together. We stopped at the B.B. King Museum, who is known as the “King of Blues” in music history. It was interesting and inspiring to see the impact that he had; his music brought blacks and whites together and he was a lovable ambassador to the power of the blues. After the museum, we got to see a live blues musician, which brought the experience to life even more. On one of our longer drives, we watched the movie Ray, which showed the impact Ray Charles had by refusing to play a segregated show. 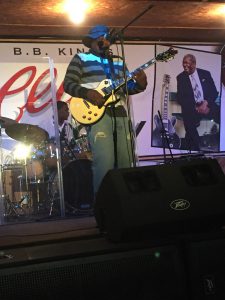 Wally On Wheels has been an invaluable opportunity. It is one thing to listen to the music of African American artists, but it is another thing to study it. Furthermore, it is one thing to study African American music in the classroom, but it is another thing to immerse yourself in its history by traveling the South in order to visit the sites associated with your teachings. With that, I would like to thank Wabash College, Professor Reed Spencer, Professor Shamira Gelbman, and anyone who helped make this immersion trip possible; it is something that I will never forget.