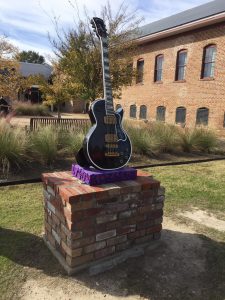 Justin Raters ’19 — Today, the Wally on Wheels Immersion Trip visited the BB King museum and Club Ebony, which was once one of the most prominent African American clubs in Mississippi. These stops further showed me two things: the importance of learning unfamiliar cultures, and the importance of preserving history. These lessons have been taught throughout my schooling, but I was able to experience them more personally when visiting these sites. I can say that these were lessons that were frequently in the back of my mind throughout the day today, as well as during the entire trip thus far.

Being from Crawfordsville, I have not had much experience with blues music or African American culture as a whole. I have heard blues music before and studied it some in class, but the BB King museum helped to bring the history of the genre and culture of blues to life. It taught me why blues music was so important in the lives of the artists and the emotions it filled the listeners with. To me, the blues has always just been another genre of music, but to African Americans, especially during the 1900s, it was much more than just music — it was a way to express themselves and overcome the many struggles that they were faced with on a daily basis.

While at Club Ebony, the DJ spent some time explaining to us the history of the club and why it was significant. What stood out to me the most was that one of the owners had renovated the building so that the original look of the interior was hidden. While to her it may have looked better, she covered up the history of the club—including posters, ceiling fixtures, and glass-blocked walls. When the museum gained control of the club, they discovered these things hidden away and brought them back to life. Through their leadership the club lives on through the people that continue to perform there like in its hay-day; history really does live on.