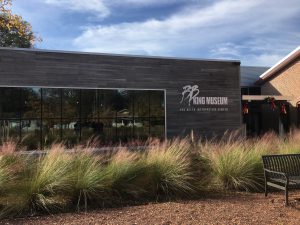 Outside the B.B. King Museum

Darren Dartis ’18 —After traveling over 1300 miles throughout the South, we made a stop in Indianola, Mississippi which is the town that the blues legend B.B. King grew up. This town was the smallest we have encountered while on the trip but you could almost feel the history when we approached the B.B. King Museum. As we got off the bus, there was already blues music playing from the site and continued as we first began the tour of the museum. I personally did not know how significant B.B. King was to not only blues music but also civil rights history. My favorite part of the museum was being able to see all of artifacts they had on display which ranged from customized guitars to vintage cameras from the 1950s. It was great to see how one man had an effect on blues music which paved the way for him to have a positive impact on the entire world. 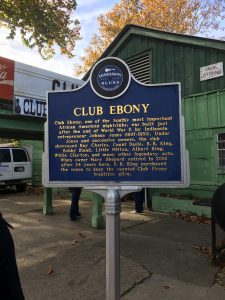 After the museum we ate at B.B. King’s nightclub, Club Ebony. This was by far my favorite stop because of the rich history and feel as you entered the venue. We had a very tasty lunch while the DJ played a wide range of blues music. I found it really hard to sit down because I had an urge to get up and dance the entire time. I kept tapping my foot to the beat and clapping along just trying to soak it all in. After lunch a local artist came and played some live blues music. This was the most meaningful moment to me because I have heard blues music before, but I have never felt it. I kept thinking back to how it would been back in the day when Club Ebony was thriving. Towards the end of the performance I started to understand the importance of blues music and culture and why it resonated with so many people across the globe. Music has been proven to dramatically change lives musician and the listener.