Nathan Biggs ’20 — Today we took on Atlanta. The hustle and bustle of the big city proved no match for us Wallies and overall I had an excellent experience. Two that stood out the most was my interaction with the Atlanta Center for Civil and Human Rights and the presentation of hip hop music by Dr. Lakeyta Bonnette- Bailey. 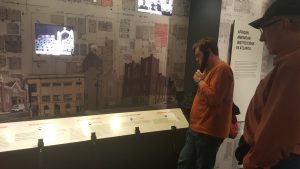 Nathan Biggs at the Atlanta Center for Civil and Human Rights Museum.

My day started out in a Georgia State University Classroom with Dr. Bailey learning about political hip hop music that she had studied. The idea of rap music being political shocked me, seeing as I don’t typically listen to rap music for the message. As many will usually say, “rap is degrading and a terrible genre of music,” yet I learned today that that isn’t always the case. There are indeed rap songs out there, by mainstream artists, which focus heavily on the social and political injustices that are currently happening. While looking at the lyrics I came across a new light of thought. It is the judgment and stereotype that these songs are trying to break to get excellent ideas out about current events, yet no one wants to give them the time to listen to them because they fall under the rap category. I remember a specific line from a song that we listened to that said “I know they won’t play this on the radio,” which is completely true. Of course the argument can be made that some of the words used in the song are too explicit to be aired on the radio, but this is easily defeated if a censored version was released. Yet it still won’t be aired because of its political nature in a genre that isn’t considered to have political messages.

The second half of my day consisted of going to the Atlanta Center for Civil and Human Rights. The center itself is beautifully constructed and from the outside one would ever be able to guess how many wonders lay inside its walls. The highlight of the museum visit was the sit-in simulation. I honestly felt like I was present at a real sit-in and the overall experience was exhilarating. One can read multiple books about the sit-ins but not many get to experience a simulation as close to the real thing as possible. I walked away from the exhibit with a complete different feeling towards the sit-ins and I see the people who conducted them in a new way. I only experienced 90 seconds of a sit-in but it was almost all that I could handle. To know that the protestors couldn’t turn around or acknowledge the white southerners harassing them truly shows a test of their will and determination.

Overall, I left this day with many new ideas and different views of thing that we had been learning in class. The struggle and determination of African Americans in today’s world and the Civil Right’s world is apparent to me now more than it has ever been.