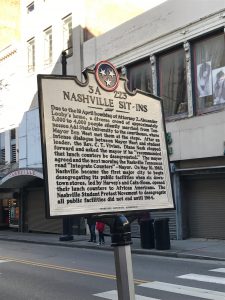 Sign at location of Nashville Sit-in during Civil Rights Movement

David Ortega ’20 – Our immersion trip began with a brief tour of Nashville, TN by a Wabash alumnus. The alumnus spoke about the history of the Civil Rights Movement and how Nashville was at the time. Immediately, we witnessed pieces of history from the movement still present. The group walked passed a Walgreens that is open and running, which was also open during the CRM. The Walgreens was also where a sit-in took place in 1960 when Walgreens had a lunch counter. The establishment that used to openly support segregation serves as a reminder to present day society of the tensions felt less than a hundred years ago. After, our group went to Capitol Grounds, where we saw monuments and memorials. The most surprising part of this experience was the giant statue commemorating Edward Carmack, who is best known for driving Ida B Wells out of town. Primarily, I had never considered Tennessee as part of the South. Regardless of Tennessee having segregation issues during the CRM, I do not understand the necessity of keeping up the statue of Edward Carmack and hope that it can be removed. We then went to a library in town that has a section dedicated to the civil rights era. It was here we watched a documentary further explaining the sit-ins that occurred in Tennessee and the societal relations of the time. It was an amazing opportunity to observe in person the strategic planning and training needed when implementing non-violent marches that receive violence in return out of racial hate. This made me debate about how the location of Tennessee played a factor in the amount of violence used by white officers and police compared to town in Mississippi. Regardless of the severity, it amazed me how active college students were in the CRM regardless of advice and demand of authorities or parents.