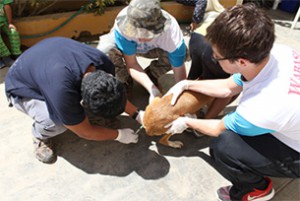 Wyatt Tarter ’17 — While in Peru, I saw a massive number of dogs, or perros. When I say hundreds of dogs over the course of the trip, I am not joking; dozens per day, all wandering around the neighborhoods.

Sadly, many were in poor health, and I specifically remember two really examples, which I’ll talk about a little later. Despite their poor condition, it was obvious that the owners loved and cared immensely about each and every one of them.

When in Huánuco, we ran a health clinic that tried to help the people and pets. Chase and I were assigned to the pet clinic portion, and our duties primarily involved holding the pets while they received shots, deworming medicine, and were sprayed to get rid of fleas.

One family brought three different pitbulls, each around 60 pounds, and another brought four different dogs and a cat. One of the dogs was brought in a burlap sack because the family was worried it might have an extremely contagious disease. One of the doctors proceeded to give him a shot through the bag, and after he did, the dog started bleeding excessively from the place it was pinched. It turned out the dog had mange, and its piteous squeals still stick with me.