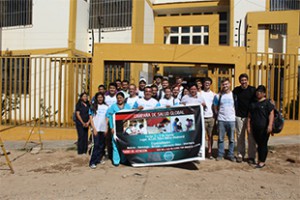 Samuel Hayes ‘19 – The Global Health Initiative immersion trip to Peru was an unforgettable experience to say the least. Culture shock set in as soon as we exited the airplane in Lima, and it lingered for the rest of our time there.

While in Peru, we visited areas throughout Lima, and other communities such as Huánuco, Tingo María and Pamplona Alta. Every destination had its share of poverty and health issues. In some instances, the degree of poverty exceeded anything I could imagine witnessing in the United States.

We spent time volunteering in a health mission in Huánuco, and it was probably one of the most eye-opening experiences I have ever had. We assisted doctors in their practice, veterinarians in their treatment of animals from the city, and helped educate the locals on what a good, nutritious diet would be for all ages. I witnessed first-hand the suffering of many individuals, children, and their pets, and my perspective on the needs of people around the world became much more accurate.

I feel like one of the most important issues that needs to be addressed in Peru (at least in the communities we visited) is animal control. Everywhere we went, there were tons of dogs running around the street, each harboring its own infestation of parasites and disease. The health of the dogs itself is a huge issue; however, the problem does not stop at the dogs.

Many of the families in the communities around Peru considered many of these dogs to be pets, which means they allow these unhealthy animals to come around their homes and families, bringing their diseases into the homes. In our time assisting in the treatment of those animals, my classmates and I saw many dogs with an unbelievable amount of fleas and ticks, and those are the only vectors we could see with the naked eye. We also analyzed feces samples from dogs in Pamplona Alta and we found eggs of parasites in many samples.

I believe that if an initiative was taken to educate people in these communities on how to take care of their pets, a lot of easily avoidable health issues would decline in frequency.