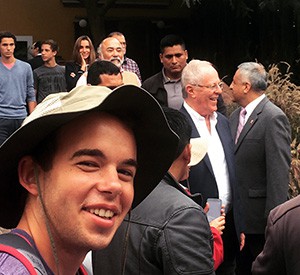 Nicholas Vedo ’19 — Life is much like the liberal arts in that it requires solving problems from a variety of angles and disciplines of thought. Before going to Peru for the Global Health immersion course I was quite nervous, I had never been outside of the United States before and was anxious about how different Peru might turn out to be.

Peru did turn out to be different in a very good way. Peru opened my eyes to the privileges that I possessed as a citizen of a country as developed as the United States. Peru showed me how truly comfortable my life was compared with that of the local people in Tingo María, Huánuco, and even Lima. However, Peru also showed me how immensely kind and honestly happy its people were on a scale that I had not seen before. Despite the flawed health infrastructure of their country, these people lead their lives to the fullest. I really admire their mentality, and seek to replicate it in my own life.

What I noticed almost immediately in terms of health problems in Peru was that often they did not have one single source; rather, there were a host of larger problems that had combined to cause those that we were seeing every day in the cities and towns we visited. For example, in Tingo María one of the local hospitals had a problem with rats because the government had built it directly next to a market. If the government had not failed to put in the necessary resources to build a safe and sanitary hospital, then the health related issues of the locals might have subsided.

Just as problems have multiple sources, they also require solutions from multiple views and directions to be fixed. During our trip we met the president of Peru outside of a restaurant in Lima. He was a very kind to us, but it was quite obvious to everyone there that he was a very busy man. The health change Peru needs must come first from the people of the country. Only the people can put the pressure on the government that is needed to cause notable and lasting change.

Peru has a lot of work to do and the evidence for that is visible throughout the country. Whether it be in the capital city of Lima, where half of the city resides in slums with little hope of escape or a better future, or in the Andean mountain city of Huánuco, where dogs outnumber people and carry any number of diseases, these problems must be addressed immediately or they will continue to fester and cause greater problems for a developing nation like Peru.