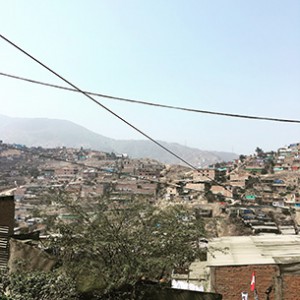 Jared Cottingham ‘18 – I spent the day working with other students in the veterinary section of the clinic in Huánuco, which was an interesting experience. The sheer number of pets per household was unbelievable; each home likely had a minimum of three dogs or cats on average.

The veterinarian treated almost every animal for fleas and ticks, which led me to believe that the animals had spread a great deal of insects and possibly disease throughout the household, therefore affecting the people within them. It was very unusual to think of these animals serving as potential vectors of disease and affecting the family, as this is relatively unusual in the United States. Year-round veterinary care could easily avert these effects, however that level of care just isn’t the case for this portion of Huánuco—making our presence even more important.

As I walked about the clinic and observed what was going on, I began to notice a lack of soap and toilet paper/paper towels within the restrooms. Additionally, many areas of the clinic were not roofed. Working in a hospital myself, this was utterly shocking to me. How were the workers and or patients washing their hands? I immediately began to think of the potential bacteria and disease that were being passed throughout the clinic and was truly moved. Even in a place of healing, community members could not be properly isolated and protected from infection. This was a sobering realization.

However, I couldn’t put my earlier sentiments entirely out of my head. As the children brought literal bags of animals into the clinic, something unfortunate dawned on me. These children, maybe five or six years old, were given responsibilities that children of the same age don’t have in the United States. I can’t imagine a child of this age bringing in four animals to the veterinarian back home.

Furthermore, as we walked throughout the community passing out flyers for the clinic, I came across a young boy carrying a pail of water that was much larger than he—yet another example of the immense amount of luxuries we are afforded within this country. If a child wants a drink of water, they walk to the fridge. In Huánuco, the same child would have to walk nearly a mile or more and carry a full pail back to the household.