James Fritz ’16 – The bus ride out through the suburbs of Florence was interesting, as the large bus zipped through tiny roads with precision skill of clear experience. Leaving the city behind, we twisted our way up into the Italian hillside.  Our destination was San Andrea, a tiny town with only Machiavelli’s villa and a restaurant. Seeing the house where he stayed in his exile from Florence – seeing the same far off view of Florence that Machiavelli would have seen in anger – was fun, but paled next to the beauty of the countryside itself. 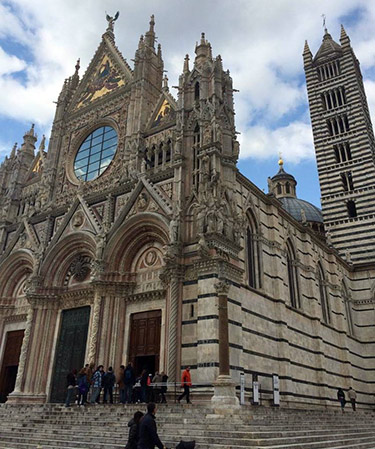 After a tour we had an incredible full course Italian meal. Trays of meats and cheese and crustini were sampled first, then the pasta course, them the meat course featuring bistecca fiorentina, which is an amazing and beautiful thick Porterhouse seared for hardly any time at all. The dessert course rounded off our meal with an Italian take on Apple pie, and we were stuffed for the rest of the day. Italian dining hospitality coupled with excellent food makes for a wonderful time.

Adam Alexander ’16 – Wow. What a week! We’ve seen so many things and learned so much that it feels like we’ve been here for a month. I only wish we could be so lucky! Today we went to Siena and got to see many incredible things. But rather than the sort of academic report I gave on Wednesday, I’m going to share my more general thoughts on our trip.

I feel very blessed to call myself a sort of amateur traveler. Thanks to Wabash, I’ve been able to go to Cuba, New York, study abroad in England, and now Italy. I’ve also been fortunate to go on a couple of vacations with my family to the Caribbean. In all of these places, I’ve either been fluent (English) or had intermediate skills (Spanish) in the native language. Not so in Italy. It really makes me empathize with immigrants around the world. It’s a very powerful, humanizing thing to go into someone’s hometown and have no idea how to speak his or her language, and it’s something I’d never experienced before. Today in Siena, I went into a small neighborhood grocery store for some wine and olive oil. Unlike in the tourist-centric areas of Florence, the store owner did not understand a word of English, so we had to engage in a bit of charades and pointing at things in order to communicate. Even still, this man was completely polite the whole time, and never made me feel unwanted or disrespected for not knowing his language.

It’s impossible to express how lucky I feel to have had this experience in Italy, as well as all of the others Wabash has afforded me. You can spend hours in the Lilly Library studying everything there is written about a city, but until you actually see it for yourself, you cannot possibly reach full understanding. This is something that seems to fall on deaf ears to too many in the academic world. Not so for us. Wabash gets it. It’s one of the things that makes Wabash so great, and why I’m so proud to call myself a Little Giant.

When I was a prospective student, I attended an immersion trip panel discussion at Wabash, and I read through all of the blogs of the students who had the opportunity for immersion learning. I knew after reading them that Wabash was the place for me. To the prospective students who will read this post, I hope you will find that Wabash is the place for you, too. Our College will open so many doors for you, and take you places of which you’d only dreamed – maybe even to Florence’s Duomo.

Sean Best ’16 – Siena. A city with a conscience, and visible monuments to their failures and successes. A city with great history and great violence. Neighborhoods allied against other neighborhoods and a rivalry with Florence that is still visible in the graffiti all over the buses between the two. All this makes it the most obvious example of a republican city. Obviously I do not mean the American political party, but the classical ideals of civic responsibility and citizen sacrifices for the city. Their frescoes of martial skill in war and their sunken failure of a church to rival Florence were built by public funds. In success and failure, the people were together.

Siena is an example of why Alexis De Tocqueville believed American democracy was more successful in the nineteenth century than France’s: the power of association. As people joined smaller communities; fraternities, Kiwanis Club, etc, they cared more about their communities and made a conscious effort to improve it. In Siena, this took the form of the Contrada, neighborhoods where the people associated deeply with that neighborhood and would fight rival Contrada for influence. To this day, rival Contradas rarely allow marriages between them. This seemingly unhealthy relationship, similar to fraternity life at Wabash, made their republic stronger and more wholesome. It is a beautiful monument to what mankind can do when we care enough.

Dylan Miller ’16 – Today, PSC 335 ventured through the Tuscan hills via bus to the city of Siena. As soon as we arrived, we walked through the city’s small, winding, and hilly roads to a restaurant right off of Piazza del Campo, the city’s historic and current center. Like any good Italian meal, we ate for hours as course after course of bread, pasta, meat, dessert, café, and of course, wine were served. 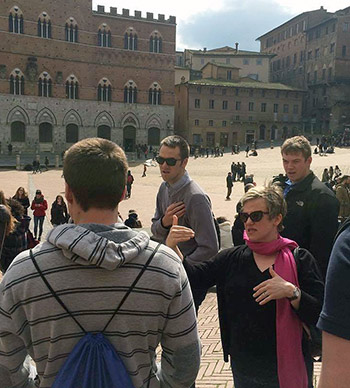 After lunch, we embarked on a much-needed tour of the city to walk off our meal. We began in the Piazza del Campo where the focal point is the large Palazzo Pubblico, which was the city’s main governmental building. The piazza is also known as being the center of Siena’s famous horserace known as the Palio. The 90 second, bareback horserace pits the city’s seventeen contrade, or neighborhoods, against one another. Continuing our walking tour, we explored the contrada onda neighborhood right off the Piazza del Campo. Here we discovered the amazing civic identity and pride the contrade of Siena represent.

Next, we explored the Siena Cathedral. The cathedral is adorned with an intricate façade, elaborate mosaic floors, and a beautiful dome. Despite the cathedral being obviously religious, the idea of civil identity and pride continued to be a theme throughout the cathedral similar to the themes we’ve seen repeated in Florence.

We finished our visit to Siena with a winding climb to the top of the unfinished extension of the Siena Cathedral for a spectacular view of the city. We crowded onto a bus back to Florence and enjoyed pizza and gelato on the steps of the Basilica of Santo Spirito as our final dinner in Florence. Arrivederci, Florence!