Nathan Bode ’16 – Buonasera da Firenze! My name is Nathan Bode, and I am one of the lucky senior Political Science majors visiting Florence over Spring Break. With Comprehensive Exams behind us, the seniors (and lone junior) on the trip have appreciated the chance to get off of campus and explore the Tuscan city and countryside. Don’t let the gelato fool you though – it’s not all play and no work! I researched and prepared a short presentation to introduce our class to one of Florence’s most iconic pieces of architecture, the Florence Cathedral, or La Catedral de Santa Maria del Fiore. Like constructing the cathedral itself, giving a sufficient introduction to the gargantuan gothic church was no easy feat, and describing the austere power of such a space in a mere blog post will be all but impossible. You’ll just have to take my word for it. 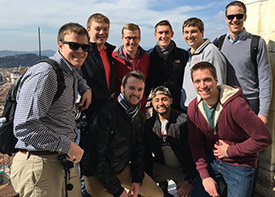 Santa Maria del Fiore, completed in 1436, contains art and architectural influences from many of the great Medieval Italian artists such as Brunelleschi, di Cambio, and Giotto. The cathedral is located directly across from St. John’s Baptistery, and was one of the first construction projects in Florence designed in two distinct directions: not only anticipating how Santa Maria del Fiore would appear from the Baptistery, but also how the Baptistery would appear from the church. Because the church was funded publicly, rather than commissioned privately, it was to serve as a “church of the state” and a church of the people (aka “People-Tested, Machiavelli-Approved”). This dramatic change in architectural mentality is also reflected in the impressive façade of the Cathedral, formed to be viewed at many different angles and approaches, quite literally from many different walks of life.

Representative of the attempt at a public reclamation of the city’s greatness, the Cathedral dominates the city, particularly “la cupola” or “Il Duomo,” the massive brick dome sitting on top of the church. Decorated on the inside by Vasari’s Last Judgment fresco, the dome rises 376 feet and offers a breathtaking view of the city. As Wallies, we were not content to see Florence from ground level, and climbed the 463 cramped, spiraling steps to the top, ducking through stone tunnels and shoulder-width passages. Considering an accompanying senior, Marcus Kammrath, measures 6-foot-8, this was actually a serious task. Whenever the foot traffic to the top would momentarily jam, we would entertain ourselves by reading the many languages of graffiti scrawled in Sharpie around the “Do Not Write On the Wall” signs. After what seemed like hours on an endless StairMaster from Dante’s Inferno, we finally completed our hike; we were not disappointed. The panoramic view of the clay rooftops, the bells ringing in Giotto’s bell tower, and the infernal squawking uccelli were entirely worth it, and resulted in a high point of the trip (no pun intended) – although I think our legs will certainly be sore for the next month. With a few more days left in Italy, I don’t think it’s necessarily downhill from there – but the trip to the Duomo will be hard to beat.