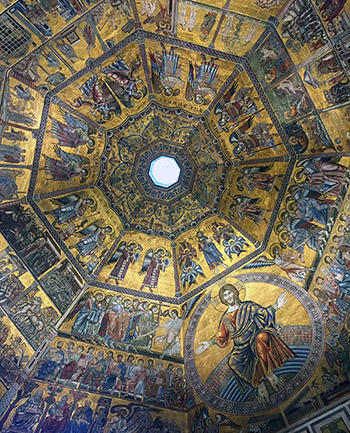 The ceiling in the Florence Baptistry.

Blair Littrell ’17 – Today I gave my presentation on the Baptistery of St. John and how important it was in our study of Machiavelli. After researching for several weeks about its artwork, structure, and relation to the city’s cathedral, I was blown back by how amazing and intricate the artwork was inside the Baptistery. The detail and the magnificence of the mosaic of Christ in Judgment was amazing, and the fact that it was in such great condition added to its shock factor. Although I’ve seen several pictures of the building and the mosaic inside from my research, pictures simply just couldn’t do it justice.

When we’re reading Machiavelli’s works in class, we hear about how the various noble families, the powerful guilds, and the various religious orders were able to exert their influence over the city of Florence, but reading about this political dynamic of the city just isn’t enough. Seeing Lorenzo Ghiberti’s famed “Gates of Paradise” and the Franciscan mosaic of Christ in Judgment in person was not only astonishing and breathtaking, but it also helped deepen my understanding of Florentine government and why it is that Machiavelli would have thought about politics in the way he did.