Josh Bleisch ‘16 – Today has been the best in Florence yet! We began the day by sleeping in (relatively speaking) and having a nice breakfast in the hotel. After catching up with everyone and recounting details from the day before, we walked around the corner to catch the bus to Sant’Andrea. Sant’Andrea is a tiny town in the hills of Tuscany where Machiavelli spent his exile from Florence. It is a huge understatement to say that this place was beautiful, and photos simply don’t do it justice. 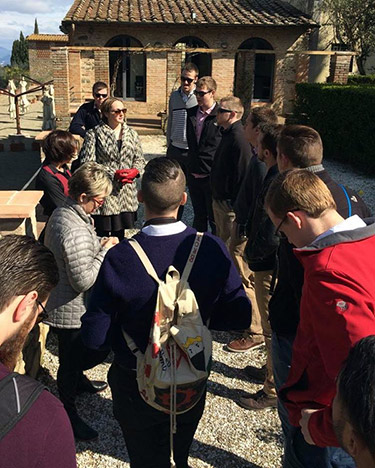 We walked around Sant’Andrea admiring the landscape for a couple minutes before our tour guide walked out. She showed us throughout Machiavelli’s family villa, explaining both what life would’ve been like back then, as well as how the villa has functioned in more recent years. Throughout this trip, we have walked around the same spaces that some of the world’s most important artists and writers occupied hundreds of years ago, but this experience was different. We were the only people there, and it was so easy to imagine Machiavelli sitting at his desk by the fireplace in a dark room writing The Prince—all the while thinking about how wounded and embarrassed he was to be exiled from his beloved Florence, which was still visible at the bottom of the valley outside his window.

We followed up the tour by having a massive and incredibly delicious lunch at the restaurant that is now part of the villa property. We ate many traditional Tuscan dishes including the much talked about bistecca alla Fiorentina. We all came away from that meal stuffed and satisfied. Needless to say, this day trip put a lot of what we’ve learned into perspective for me and for the rest of the group. Not only did we get to see some amazing scenery, we were able to learn and see what life was like for Machiavelli while he was authoring one of the most important texts in western political thought. We also got a great taste of Tuscan culture by dining and visiting a location that isn’t (at least constantly) inundated with foreign tourists.

Tyler Munjas ‘16 – As we returned from watching the sunset at Piazzale Michelangelo, which sits above the city and provides a breathtaking view of Florence, I was reminded of how fortunate I was to have the opportunity of traveling to the city for spring break. Having focused on how the architecture of early 13th, 14th, and 15th century Florence influenced political thought and vice versa, the only true way to understand our studies was to experience first-hand the art and architecture of the city. 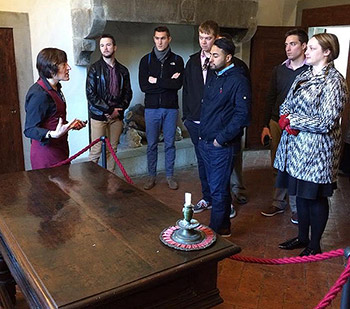 The desk where Machiavelli wrote “The Prince.”

Contrasting the private palaces of prominent families such as the Medici and Pitti, to the public spaces of the Duomo cathedral, Palazzo Vecchio, and Piazza del Signioria, it makes understanding the literature we read prior to the trip far more relatable. Luckily, Dr. Hoerl and Dr. Lamberton both have extensive knowledge on the subject and Florence itself, so at each stop we have made, they have provided us with great detail on what to examine and how to observe these spaces in a way that coincides with our class, specifically Machiavelli’s political theory.

Along with the coursework, though, we have also been immersed in authentic Italian food, supplementary artwork (the original David being the most impressive), and of course Florentine night life. Simply walking around the city and finding local and tourist favorite spots after each day of work has provided us with some unforgettable memories.

In addition to Florence, we spent today touring Villa Machiavelli in Sant’Andrea where he spent two years after a brief exile from Florence. We studied how after his exile he became much more pessimistic, which became much more clear today when we saw how his Villa from atop the mountain overlooked the very city that he loved, but rejected him. Our eccentric Italian tour guide took us from room to room, showing us the spot where he wrote his most famous work, The Prince. Additionally, we will spend tomorrow in Sienna touring the Palazzo Publico and Duomo of Sienna. All in all, this week abroad has been an opportunity of which I am grateful to have taken part. Though the week flew by and we saw so many important and enticing things, there is still so much more to experience. Hopefully, I will have the chance to do that at some point later on in my life.