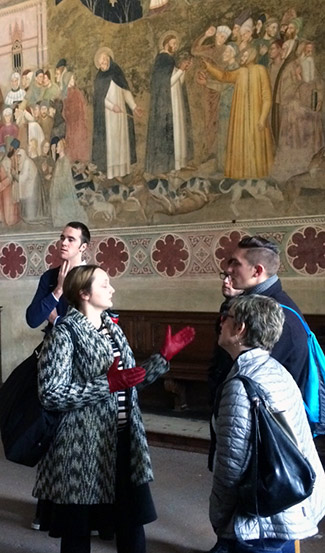 Marcus Kammrath ’16 – Today I gave my presentation on the importance of Santa Maria Novella and the artwork and chapels inside. The church is the oldest basilica in all of Florence, with the bottom portion of the façade being the oldest existing in the city as well. The top of the façade was later commissioned by the Ruccellai family. Inside, we saw many great representations of how the families would compete over the chapels to show their power and their hospitality towards the city and public places. The earliest piece we saw was done by Massachio, titled Trinita. It was a great representation of early Renaissance artwork using mathematical proportions as well as proper scale to give a more real look to the painting. Today was a great day and we saw a lot more in different churches. Florence is great and the troop that we are traveling with is even better!

James Fritz ’16 – Built in 1280 by the Vallumbrosan monks, the church of Santa Trinita sits on the square of the same name, and though it bears a mannerism façade, the interior of the church is the best medieval form restoration in the city. Notable about Santa Trinita is the fact it has the most interior chapels of any church in the city, which speaks to the lack of wealth of the monks and to the functionality of nobility in Florence. The most important of the chapels is the Sassetti chapel, commissioned by Francisco Sassetti. The chapel features frescoes by Ghirlandaio, which are incredibly beautiful and moving.  Not uncommon to Florentine frescoes, Ghirlandaio chose to blatantly put images of Florence into his frescoes detailing the life of St Francis.

The church, with its dark vaulted ceilings and corridors, gives the feeling of oppressive religion, embodied strongly in the period which the church was built.  Machiavelli would certainly disapprove of the entire church, as the chapel funding process causes issue in his opinion.  The desire to fund a chapel comes from ambition to grow family fame, or envy or another family, and this private funding creates public works, putting fame and power into the hands of nobility. This is very upsetting for Machiavelli.

Tyler Munjas ’16 – On today’s exploration of Florence, we once again visited numerous churches and museums, observing the physical structures that we have spent the last seven weeks studying in class. One stop, the focus of my research, was the Bargello Museum. Constructed in 1255 as the Palazzo del Podesta, this building was extremely significant for its role in helping the common people of Florence obtain a position of prominence within the government. Until the rise of the primo popolo (government of the people) in 1250, the city of Florence was subjected to the competitive nature of the elite families as their conflicts and inefficient ruling overlooked the needs of the common people. 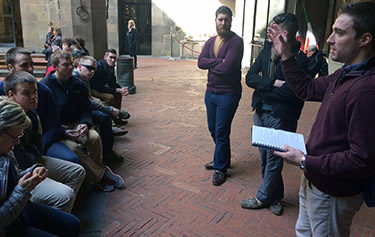 Once elected in 1250, they set to work constructing a necessary fortress to house the Podesta, the highest ranking official in the government. It was during this time that the Palazzo served as a place of discussion for the people’s dissent towards the nobles and helped initiate such urbanistic policies that chipped away at the noble’s extravagant display of wealth and power. Among these policies were the limiting of the size of each noble family’s tower to 29 meters and a call for the widening and reconstruction of the roadways. Through the latter policy, the common people were able to walk to the Palazzo without facing harassment from the noble families, as they were subjected to previously. The former policy, however, shows just how resilient the people were in rejecting the dominance of the nobles. The tower on the Palazzo stands 57 meters tall, much higher than the newly ordered limit of 29 meters which gives the impression that the common people have more power over the noble families.

Though the Palazzo del Podesta served its purpose as a governmental structure until the late 1500s, the primo popolo lasted only until 1260. The common people were resilient, however, and regained office in the 1290s. During this time, more action was taken by the people to keep power on their side. For these reasons, the Palazzo del Podesta was an extremely significant structure for the evolution of government in Florence. Also of note, many executions took place in the courtyard of the Palazzo, most notably the executions of many conspirators in the Pazzi attempt to overthrow the Medici. It was converted to a prison in the 1500s, when it was renamed as the Bargello. It served as a prison until 1865 when it changed into its current structure, the Bargello Museum. The Museum is home to famous works by Donatello, Michelangelo, Ghiberti, Brunelleschi, and many other prominent Italian artists. 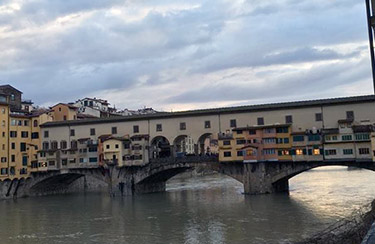 The Vasari Corridor runs atop the famed Ponte Vecchio bridge.

It was absolutely great to have the opportunity to see these places in person, and to put the things that we’ve learned in class into context. The Palazzo Pitti was built by a wealthy Florentine banker, and is much larger than most other family palaces in Florence. This really connects with the theme of private families competing with one another to create the grandest things—something Machiavelli sees as deeply problematic. Its walls also have many connecting arches, which are reminiscent of Roman aqueducts. This was done deliberately in order to convey a sense of Roman imperial power.

The Uffizi complex is now an impressive art gallery, but its original purpose was as an office building for Florentine city officials, connected to the Palazzo Pitti by the Vasari Corridor. This shows the disconnect between the ruling class and the Florentine people. Officials could move from their home, to the bureaucratic office building (the Palazzo Vecchio), and even attend church without having to mingle with the common citizen. This reflects the conflict between elite and common people that has existed throughout Florence’s long history, a topic that our readings of Machiavelli have addressed multiple times.

Adam Alexander ’16 – We had the opportunity to see many awe-inspiring churches today, as my fellow students have pointed out. The one I enjoyed the most though was the Basilica di Santa Croce, or the church of the Holy Cross. Santa Croce is unique in its very particular placement within Florence. Santa Croce and the Palazzo della Signoria are on roughly opposite ends of the old major north-south street axis of the city. In a sense, this ties the faith of the Florentine people with their government. Additionally, Santa Croce was originally built opposite Santa Maria Novella, with the two churches enclosing the city’s urban center. This was done to emphasize the spirituality of Florentine merchants, and to offer protective prayers for the city’s wellbeing.

Santa Croce is also known as the Temple of the Italian Glories. In the late 16th century, Santa Croce was chosen as the burial site for Michelangelo, after Florentines broke into a Roman church to smuggle his body into Florence. Galileo is also buried under the cathedral, but his body was not allowed a Christian burial until almost 100 years after his death in 1642. The cathedral also contains a tribute to Dante, but Ravenna did not allow Florence to reclaim his body, because the city had exiled him. Machiavelli was also buried under the church, although not until 1787, even though he died in 1527.

The church is particularly relevant to Machiavelli, as it was used by Walter, duke of Athens, as his personal quarters in 1342. The duke had taken over Florence and wanted to use Santa Croce to lend religious credibility to his rule. An emissary from the Signori went to Santa Croce to plead with the duke to change his mind about ruling over Florence. The arguments used by the emissary greatly influenced Machiavelli, including the untrustworthiness of the public, and how people will switch allegiances if it should ever become convenient. The duke ultimately rejected their wishes and ruled with a bit of an iron fist over the Florentines, until he was ultimately deposed and exiled from the city.

The trip so far has been phenomenal, and it truly is invaluable to be able to experience these places in person. I fully understand why the concept of the immersion trip is one of the hallmarks of a Wabash education, and I feel so lucky for having been given the opportunities Wabash has afforded me.