Dylan Miller ’16 – Just steps away from Florence’s famous Duomo, the Palazzo Medici and the Church of San Lorenzo can be found. The Palazzo, or palace, was constructed in 1445 by Michelozzo di Bartolomeo and commissioned by Cosimo de’ Medici, a member of the incredibly influential and wealthy Medici family of Florence. Cosimo rejected an original design for the palazzo from Brunelleschi, one of Florence’s most well known artists, because the design was too lavish and magnificent. Cosimo feared that the magnificence would arouse envy among citizens; so rather, Cosimo insisted the palazzo be viewed as a public ornament for the city. The idea of magnificence and envy are foundationally important concepts in Machiavelli’s theories. 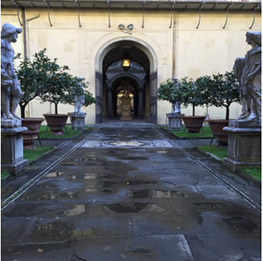 The original palazzo was shaped like a cube with a combination of traditional styles of sandstone and rustication as well as Renaissance styles. The traditional styles are reminiscent of ancient Roman buildings, which make the important connection between Florence and the famous Roman Empire. This connection to Rome was linked to the idea of Roman virtue, which Florence, as well as many cities in Italy, wanted to emulate.