Derek Andre ’16 – Hearing Desmond Tutu speak is a religious experience in more ways than one. Three Wabash students, myself included, experienced that firsthand. It was Friday morning of our South African adventure, the next to last day of the trip. Our guide, Linda, had mentioned the night before the Father Tutu was, per St. George’s Cathedral, Tutu’s home church, slated to give the morning service the next day. The only issue was that the service started at 7:00, meaning those who wanted to go needed to be out the door before 6:30 – an early wake up call after a week of sprinting through Johannesburg and Cape Town. Three of us awoke to heed the call of listening to the Nobel Laureate. We made our way through Cape Town and into St. George’s, a gothic 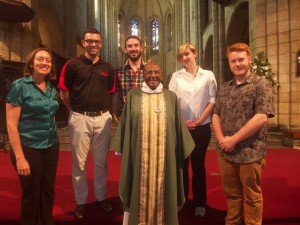 A photo taken with Archbishop Desmond Tutu, notable for his work in the opposition to Apartheid.

masterpiece located next to the Parliament building. The service was held in a small, ancillary chapel with seating for about forty attendees. After a few minutes of waiting, and a reminder by the other priest assisting with the service to silence our cell phones, Tutu appeared. He wasn’t a large man – in fact it’s quite the opposite – but he commanded the room when he entered. He conducted the service in three languages, English, Xhosa, and Afrikaans, and used each during his invitation for communion. The prayers given were worldly in nature, thanking America for jazz, criticizing it for its demons, and pleading with all of us to pray for Beirut and Paris. That he broke from the script of monolingual, strictly-biblical services that many, myself included, are so accustomed to in America was, in my opinion, the most striking thing about Tutu. This was a man – one awarded the Nobel Peace Prize for his work in ending Apartheid through mediation, who also chaired the Truth and Reconciliation Committees that helped to draw the so-called ‘Rainbow Nation’ (his words) back together – so committed to his principles, one of a unified South Africa, that he brought this into his sermon for the morning. He drew on three very different cultural traditions and languages in a way that was breathtaking.

I’ve been fortunate to have some wonderful experiences because of Wabash. I’ve travelled the world, presented at conferences, and met some of the most wonderful people I’ll ever know. But there’s something special about seeing, and shaking the hand of, an individual who has contributed so much to the world in what may be one of his final services. It’s an experience I won’t soon forget.​