Chris Biehl ’16 – Revolution is a word not whispered, but shouted from many students at the University of Cape Town. Revolution 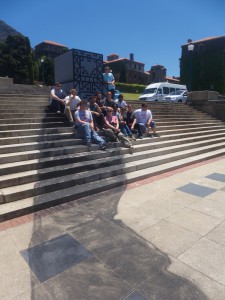 Sitting where the Cecil John Rhodes statue used to be at the University of Cape Town. The shadow that the statue would normally have cast was painted below.

can mean anything from changing the space at the university to lowering fees for the students as a whole. Today we met with students both under and post graduate who are involved with the Rhodes Must Fall Movement. The students in this group recently 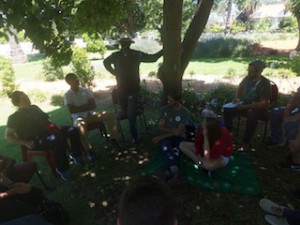 Chatting with, and learning from, Rhodes Must Fall activists.

removed a statue of Cecil Rhodes that loomed over the centre of campus. To these students, and many South Africans, Rhodes represents the evils of modern colonialism that is still prevalent in Cape Town and the country as a whole. Rhodes was a diamond tycoon in the 20th century who exploited black Africans for labor and and made a tremendous amount of wealth from the diamond trade. His infamous legacy can be found throughout Cape Town and specifically UCT. One of the students we met with, referred to as “Prof”, explained to us the struggle of black students who attend UCT. A lot of his concerns revolved around the lack of professors of colour. He told us that out of the 231 professors at the university, there are only 3 black female professors. This is an issue because many of the students at the university are of colour, and feel that their education is at a disadvantage. This was extremely surprising to me simply because of UCT’s location in South Africa. To Prof, and the other students, this is a sign of colonialism still being prevalent in today’s society. A lack of professors of colour combined with several memorials and statues of Cecil Rhodes has created a formula of revolution for these students.

What was so powerful about these students was their desire for change through revolution. Instead of waiting for something to happen or using process as a means of change, these students decided to take action. They physically removed something that represented oppression and marginalization. Revolution as a tool of change is detrimental to the oppressor and society that belittles a population. We can use their struggle as inspiration for our own revolutions. There is nothing that prevents change except the chains we put on ourselves. What is your Revolution?