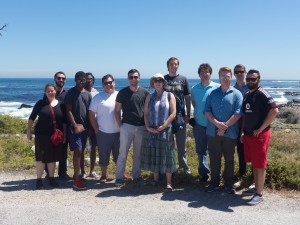 A group shot at Robben Island.

Christian Rhodes ’17 – 18 years – that is how long Nelson Mandela was incarcerated at Robben Island. Robben Island is a 2sq mile island just off the coast of Cape Town where political prisoners and other violent offenders were housed from 1961 until 1996, when it was closed and the prisoners were transferred out. Three post apartheid presidents were housed on the Island in Nelson Mandela, Kgalema Motlanthe, and current president Jacob Zuma. The Museum that is now accessible by the Public is a sign of such oppression that it is hard to swallow as a tourist visiting South Africa for the first time. The mere fact that we had the ability to hear stories from a former prisoner is very telling as to how far the country has come in terms of healing, but he made sure to point out that the process is not complete, there is still healing to be done. His life for 27 years consisted of monotonous routines and constant threats of violence from the Guards. He was the most influential individual in the Revolution for equality in South Africa. He was classified as a political Prisoner and enemy of the state for speaking out against the Apartheid government. Mandela spent his afternoons in the quarries carving out limestone and moving large chunks for nothing more than cruel punishment. He was confined to a single cell that was minimalistic and bare. The most inspirational part of the entire situation was the fact that Mandela himself was still able to love and forgive the men who locked him up for 27 years. The south African apartheid was a dark time in history but moving forward, awareness and forgiveness are how the country is moving forward.